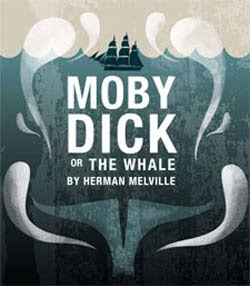 A review of Moby Dick, or the Whale
By Book-It Repertory Theatre, at the Center House Theatre
By Chelle K.


Herman Melville has been thrust upon all of us during our high school years; Moby Dick is one of the mandatory reads. However, it is one of the few obligatory novels that doesn’t make me want to obliterate myself. In this sense, it was a treat to be able to experience a translation of the intense sea adventurers through stage performance by Book-It Repertory at the Center House Theatre, directed by David Quicksall. The illustriousness of the book drew me to the play, and my curiosity heightened pre-show as to how the characters would be cast. Could I proudly look upon the stage and call that actor Ishmael? Would Queequeg feed all my literary notions of a loving cannibal? Would the cast embody everything I had known and come to enjoy through Melville’s text?

They certainly did. Nevertheless, this fact almost seemed a little disappointing to me. A book so studied throughout American culture, and beaten into the brains of student youths nationwide, led me to feel that a direct translation was almost more of the same. Little creativity was involved in constructing the play, and the fact that is was everything I expected, made the play less than brilliant. Moreover, David Hogan, playing Ishmael, brought almost a contrived depth to the character. His enthusiasm on stage and inability to pull off the mystique of his character seemed to parallel with quite an amateur performance.

Simply put, the book is a very familiar one to most literary buffs. In this sense, seeing as the book is so familiar, it would have been nice to bring a fresh perspective, or an interpretation of Moby Dick, or the Whale to stage. That being said, if the play were based on quality in accuracy of literal depiction, it would earn an A.


Moby Dick, or the Whale plays at Book-It Repertory
located at the Center House Theatre in Seattle Center
now through March 8, 2009
visit www.book-it.org or call 206.216.0833 for tickets and information