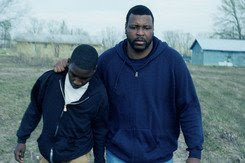 A Review of Ballast
at Northwest Film Forum
By Joshua G.


Watching Ballast is an interesting experience. Although I am very skeptical about how much enjoyment one can gain from viewing the movie, it is nonetheless absorbing. Ballast premiered at the 2008 Sundance Film Festival. It will be shown next at the Northwest Film Forum. The movie is an independent production in its execution and presentation, and it is director Lance Hammer’s debut feature. At times, the movie is surprising in its effectiveness primarily due to the cinematography. The strongest feature of this movie is without a doubt the cinematography. All the images are captured using a hand-held camera. The composition in many of the shots is outstanding. There are several truly memorable images. The movie addresses a poor man's suicide and its impact on the lives of three individuals. The three individuals are his son, his ex-companion, and his twin brother.

Unfortunately, the story is very fragmented and for the better half of the movie, the characters are not clearly rendered. The movie is filled with obvious and at other times subtle symbols, for example, the opening shot in which a flock of birds fly away. This was a confusing image for me as I was not able to connect the symbolic meaning of this shot with the storyline. This image seemed to distract me from being able to uncover the plot. It was not until much later in the film that I was able to decipher the meaning of this image. I was able to make the connection between the three main characters who all in their own distinct way wanted to fly away from their lives.

The pacing of the film is slow. The scenes are very disjointed with each one feeling like a vignette of a larger story. One of my major problems with the film was how slowly the story transpired. It felt like it took a very long time to discern what the story was about, and it took a long time to figure out the significance of why the scenes were presented in the way that they are. I knew the immediate motivations for what the characters were doing, but I did not have enough background information. Because of the slow and plodding pace of the movie, events seem to drift by without having a true relevance to the storyline. The images and representation of the characters are presented in such a way that I did not form a relationship with the characters. Since I did not have an emotional connection with the characters, the story felt disjointed and unimportant. Although I wanted to know what happened, when things finally came to resolution, I did not feel that they were that significant nor did I have an emotional reaction to them. Looking back, I feel bad for the characters and many of the events that happened to them were challenging to watch. I continued to watch the movie without any emotional connection or even a heightened sense of consciousness.

In retrospect, I believe there was a significant advancement in artistic value for this independent film. I am very interested to see what this director will do next and how his career will evolve as his first directorial debut was strong. I wish that the movie commanded more of an emotional connection with the audience. The movie was not boring or predictable. While viewing the film, I did not feel like the images that were presented were the most significant way of telling the story. Independent films do have a place, for example The Wrestler or The Visitor. Both those films were able to tell a story in a way that was meaningful for the audience. Sadly, Ballast failed to capture the importance of helping the audience care about the characters or the story.