Review of Yankee Tavern at ACT Theatre by Dylan Z.

Conspiracy theories are intriguing, 9/11 is an emotional subject, and spy thrillers are just plain awesome. Playwright Steven Dietz manages to combine all three in his thrilling drama, Yankee Tavern. Performed by some of the best actors Seattle has to offer, Yankee Tavern starts out with a New York City bar owner named Adam (Shawn Telford) and his soon-to-be wife Janet (Jennifer Lee Taylor) having a seemingly harmless fight about how half of Adam’s invitees to their wedding are made up. In comes Ray (Charles Leggett), Adam’s dad’s best friend and local conspiracy theorist, ranting about one of his crazy topics to a local radio talk-show on his retro brick-sized cell phone. 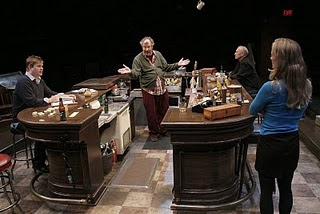 Shawn Telford, Charles Leggett, R. Hamilton Wright, and Jennifer Lee Taylor in Yankee Tavern
Photo by Chris Bennion
As the performance progresses, we learn more about the trio’s lives, all while getting lectured by Ray about anything from the ghosts in the attic to the reason his wife left him. Out of nowhere who should appear but Palmer (R. Hamilton Wright), a mysterious man who always orders two beers but only drinks one. Palmer seems innocent enough until he starts pointing out eerie coincidences that he himself was involved in on the day the two towers fell.

Near the end of the show, you are taken on a journey that seems to being going somewhere you don’t want to follow, but suddenly, in the final minutes of the play, Dietz throws something at you that will leave you wondering about the ending longer than Inception did. This particular show is performed in the round with a legitimate round table bar as the setting. The set is organized in such a fashion that the moment you walk in, you feel as if you are in a bar in New York City. On top of that, the background sounds are organized so well that they rise and fall in sync with the dialogue of the show, quieting down when conversations get intense and lightening up when the actors do (with an occasional theatre-shaking subway passing by for good measure). The actors draw you in with such intensity that you will be clinging to the edge of your seat until the very end, at which point you may collapse back into your seat wanting answers, but so satisfied with a remarkable play. So get on over to ACT Theatre and see this show before it is gone!