The band "Awesome"'s lively characters were a delight to chat with. When asked to tell a boring story, each band member put their own twist on their answer, and revealed a little bit about their distinctive personalities. Basil (specifically pronounced Bah-sil) skipped the boring part of the question and told me that he was the funniest member of all the mates. He claimed that Rob is the easiest one to pick on, and he mentioned his warped social life since the birth of his daughter, who is now two. John specifically outlined his day, from the burning of his CD, his walk to the Ballard Library, his Tom White CD that was on hold, and the gardening that had to be done. He also mentioned his visit to SNACKS, a shop with tasty treats, which was unfortunately closed, and shared that his favorite snack is Barbara's Jalapeno Cheetos. 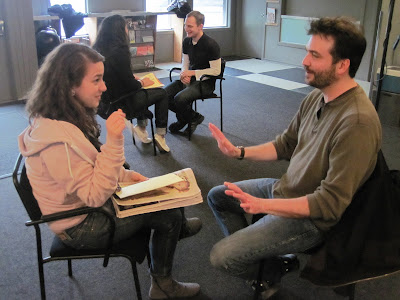 Eliana interviews the indispensable Rob Witmer
David, the banjo player, described his adventure in the bathroom, where he stuck his hand down the bathtub's drain, and pulled out a large hairball and then disposed of it. He also told me about his favorite musical artists, the Talking Heads, and the Anchors. Rob depicted his search on craigslist for a car. He also mentioned that he is a Mercer Island High School Alumni, and in fact, knows comedian Joel McHale! Evan, who works at the University of Washington, explained how he had to switch the plane tickets of some student earlier that day. He also noted that he is not a native Seattleite, but actually hails from Iowa. Kirk told me of the poor heating conditions in the rehearsal space/art studio that the band uses. As we began to talk about other things, he declared that Gross Pointe Blank is his favorite movie.