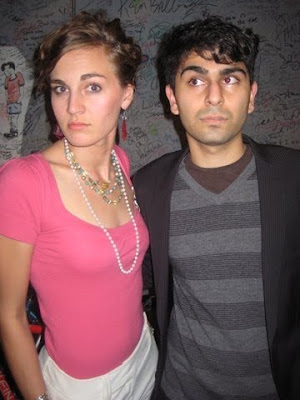 Sara with Womb Escape teammate Ahsan Butt
Sara Mountjoy-Pepka started out doing everything but acting. At Northwestern University she majored in bassoon and social policy, but her real love was acting. "I did sports all through high school and then went to Northwestern University to be a bassoonist and then later added a social policy major so there wasn't a ton of time to do theater even though I always secretly loved it. I almost felt like I was forcing myself to stay away from it sometimes - but I finally cracked half-way through my junior year in college." 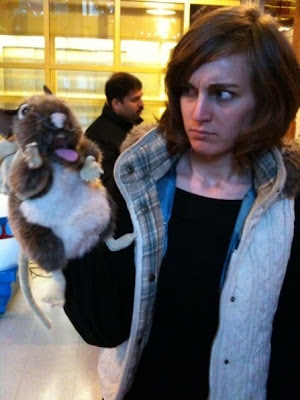 Sara with Rat Puppet: "I like puppets and this one was giving me the evil eye"
Sara attended a Magic Circle Mime Company performance in Chicago which completely turned her career around. "I saw the show just to say 'hi' and by the end of the hour I had changed my career path. I knocked on their dressing room doors after the show and demanded to be taken on as an apprentice." To comment about her first show, she exclaimed, “spring quarter my senior year I did my first show with Magic Circle. It was in Quebec, it was in French, and it was glorious.” She continues working with the company in Seattle, performing a few times a year. 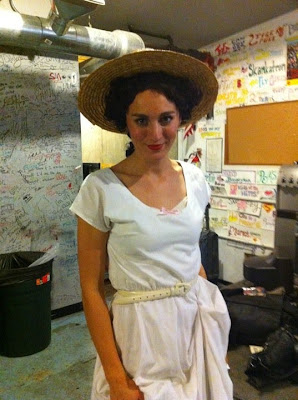 Sara in costume for Playborhood: Rogers and Hammerstein at Unexpected Productions
Mime gives Sara a chance to entertain both children and adults. The founders of Magic Circle Mime Company have drawn from Charlie Chaplin and the Marx brothers. When traveling with the group to Canada, Spain or Taiwan, she brings along her bassoon.

Sara gives her wise advice, “if something freaks out you, tackle it head-on!” She started improv in Chicago at a small theater named The Old Town School of Folk Music. "I started taking improv classes back in Chicago because the thought of getting up on stage and doing something unplanned TERRIFIED me!" Sara has been involved with Unexpected Productions, an improv theater in Pike Place Market, for little over a year. "I love UP. I love watching shows at UP and I love performing in them. I love the people, I love the space. When I was a student I met my roommate and my boyfriend and some of my closest friends there. Cheapest, best classes in town and the students mingle with the company members. It's awesome." 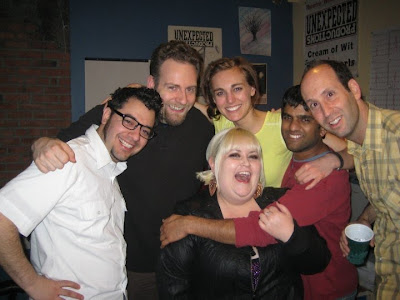 Sara with her NERDprov team and The Guild
She participated in NERDProv which she much enjoyed, ("NERDProv is awesome because we get to take the parts of our personality that have been scorned in other social circles, get up on stage, and become heroes for an hour with other people who love what we love. It's proven to me that we're never alone in the things we love - we just don't always find those communities right away. Don't despair, they're out there!") and soon she will be in Womb Escape IV, a show in which all the participants have taken a class at Unexpected Productions and been successful outside the theater. The other members of her group are: Ahsan Butt, Emily Elisei, Christina Filios and Mario Gomez in their group, the Maelstrom. Sara commented, “Womb Escape is more raw, more thoughtful. Still hysterical at times, but it's also a great chance to find out ‘where will this go tonight? Plus it's audience vote - you come and discover your favorites and vote them on to the next round for the final championship round on Saturday night."

Ironically, her favorite theater performance was not only non-comical, but Shakespeare’s most well-known tragedy, Romeo and Juliet. Playing Lady Capulet was extremely challenging because she had explore the dimensions of the character much more. However, for her, it was incredibly rewarding. Sara looks forward to doing a sci-fi show this winter, at the Annex theater. 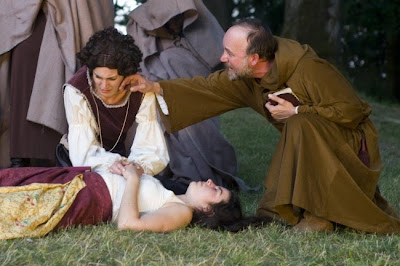 Sara playing Lady Capulet with GreenStage
When she is downtown, Sara buys “the BEST COOKIE in town, the “Casbah Cookie” at Café Casbah. Her new indulgence is her bright blue Yamaha Vino 125 scooter. One of the added benefits of driving a scooter is her motorcycle helmet. When walking into shops, she gets to pretend to be a biker and flaunt the giant helmet: "You need to see my I.D.? Okay, let me just put down my MOTORCYCLE HELMET and get it out for you once I've set my MOTORCYCLE HELMET on the table."

For young performers, “If you have a little or a lot of doubt in any given area, use that doubt to propel yourself through practice and improvement...you'll find yourself a lot better faster then you think.” And for teenagers in general, she says: "Your teen years are awkward and uncomfortable. Guaranteed, I don't care if you're lead cheerio or not. And every person you hear from who is worth hearing about will tell you they were shy and awkward and uncomfortable in high school. And THAT is because high school isn't the highest achievement of your life and you aren't ready to be top of your game. So if this sounds familiar, chill...you'll find your community and your stride soon enough."

See Sara and root for her team, The Maelstrom, in Womb Escape IV
November 17 - 21
Unexpected Productions at the Market Theatre
More info at improvseattle.com