Our reviewer, Emma M, calls the show "simply brilliant" and "definitely worth it." 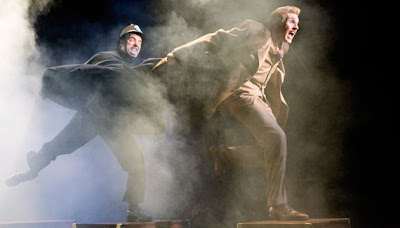 The Stranger's David Schmader says "this well-constructed show is a campy rush, laced with rare, only-in-the-theater moments. And no, you don't need to have seen the film."

The Broadway Hour Seattle's Kacie Shiflet says "It will entertain and thrill even those who live under a rock and have never enjoyed a classic suspense thriller. Hitchcock would be pleased."

Basically, people can't get enough of this lightening-paced circus of theatrical magic: four actors play dozens of characters, set pieces fly in and out in the blink of an eye, and everybody leaves laughing. You like laughing right? We thought so. Go tonight!