Review of ALL WHEELDON @ Pacific Northwest Ballet by Sandrine G.

This is a retrospective on a 38 year-old-artist. Christopher Wheeldon, though young, is already beyond his “promising” phase. Using a vocabulary of motion familiar to the classical tradition, he reveals the possibilities of dance beyond the prancing clichés that are unfortunately associated with ballet. Just as pioneering biologists in carefully calibrated labs first uncovered the secret activity of our own DNA, Wheeldon uses powerful dancers to circumscribe dynamic, wheeling helices on the boards. His works build on elemental motions and animalistic impressions to vividly illustrate the accompanying music. 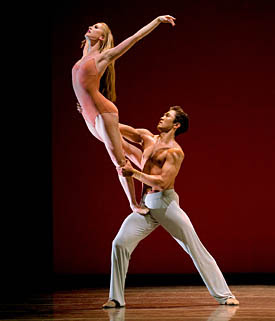 Carla Körbes and Batkhurel Bold in After the Rain pas de deux. Photo by Angela Sterling


So the show starts, and there is the yellow dress featured on the promotional posters wheeling around in an orgiastic waltz of color and variety. The dance pulses with a heartbeat counted in three as the yellow dancer careens around the rest, held in a tight orbit around them by her attraction to the central figure in the pack. This first piece, Carousel (A Dance), passes quickly to a flirtatious duet between the two outliers, combining the themes of the musical Carousel in a particle collider of dense emotional force. The following duet in the After the Rain pas de deux takes away all the bright costumes of Carousel and replaces them with stark simplicity. The orchestra is replaced with a piano and violin that are lighted at stage right. The dancers fold like yogis. 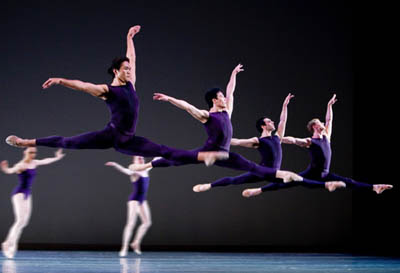 
After the first intermission, Wheeldon’s seminal work, Polyphonia, is unfurled to György Ligeti’s difficult music. Polyphonia proves Wheeldon’s reputation as a diverse artist. Through numerous pairings of eight dancers, all star-limbed like splitting chromosomes, Wheeldon makes Ligeti’s ordered chaos visual. The second intermission is the step that separates the sublime from the ridiculous, and the evening closes with a witty comedy. Choreographed to and named after Felix Mendelssohn’s Variations Sérieuses, the piece pokes ironic fun at the institution of ballet from the antics of the strutting diva to the costuming of sherbet-colored fairy ballerinas. Perhaps mimicking the stereotypes of ballet a bit too faithfully, the dance within the dance seems to continue for longer than needed. The comedy redeems itself, however, with a deliciously morbid end.

The dilated veins on a ballerina’s athletic legs and telling spots of sweat – showing through a light grey shirt and glistening on exposed skin – make obvious the physicality of Wheeldon’s dance. In such natural terms, Pacific Northwest Ballet’s All Wheeldon realizes the drama of the human body and its enormous potential.

ALL WHEELDON
Through October 2
PNB