Review of Harold and the Purple Crayon by Katie M.

The world premiere of Harold and the Purple Crayon at the Seattle Children’s Theatre is a production not to be missed. The play is based on a very popular children’s book series written in the 1950’s. This show includes elements from three of the books: “Harold and the Purple Crayon”, “Harold’s Trip to the Sky”, and “Harold Under the Sea”. The best aspects of each story are combined to create one cohesive production.

The story follows Harold, a little boy with a huge imagination. One night, unable to sleep, he grabs his purple crayon and starts to draw. Much to his surprise, the pictures come to life! Accompanied by the Sun and Moon, Harold sets out on an exciting night of adventure. Just a few of his escapades include making friends with a puffer fish, baking pie for a porcupine, and riding on an alien spaceship. 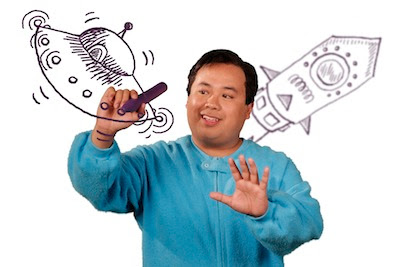 Don Darryl Rivera as Harold in Harold and the Purple Crayon.

One of the most intriguing parts of the show is the use of props and technology to portray the story. Since the storyline of this show is so simple, attention to detail is very important. I have been to some Seattle Children’s Theatre productions in the past, and they always succeed with the details. The most crucial prop of the play is Harold’s purple crayon. In a Q&A session following the show, a young viewer asked if the crayon really could write. Don Darryl Rivera, who played Harold, explained that there are actually 12 crayons used in the show which can do different tricks. Other remarkable props include: a pair of singing French puppets, a giant crab, and a majestic dragon. Annet Mateo, the puppet master, and Matthew Smucker, the scenic designer, do a fantastic job of bringing these books to life.

Another part of the show I enjoyed is the telling of the story. Music and dance plays an important role in conveying the plot. Choreographer Wade Madsen cleverly interweaves transitions with dances so that the scenes flow smoothly in context. One of the most memorable routines is when Harold goes to outer space. The characters start dancing and singing to a groovy beat inspired by the 80’s, complete with a disco ball. Caety Sagoian and Khanh Doan, who played the Sun and Moon, are talented singers that add to the ambiance. Rivera, Sagoian, and Khanh form a strong trio in all aspects of dancing, acting, and singing.

Overall, the main theme of the show is the importance of creativity. The actors cleverly utilize the power of suggestion to get their point across. Since the books consist of very few words, comedy and gestures are essential. Something as simple as a facial expression got even the youngest viewers laughing. The humor used appeals to everyone, from my grandparents to the four-year-old in front of us. Overall, the play is charming, funny, and simple. I guarantee it will get you using your imagination!

Harold and the Purple Crayon
Through October 30
Seattle Children's Theatre