Ah, Victorian London—a world of lavish parties, opulent homes, and beautiful people. Taproot Theatre’s production of Oscar Wilde’s An Ideal Husband is set in the midst of this era of perfection, when everyone and everything is expected to be without fault. The protagonist, Sir Robert Chiltern (played by Ryan Childers), seems to fit in with this perfect view of society; he is a wealthy, successful politician with an admirable moral compass. His wife, Lady Chiltern, adores him as though he were a demigod. Yet when a beautiful and clever divorcée appears with a letter from Sir Robert’s past, it is discovered that he is not quite the husband his wife thought him to be. 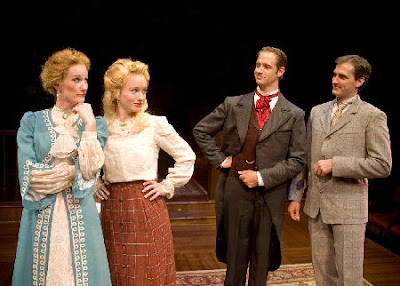 The first half of An Ideal Husband is slow going—more due to the play itself than any shortcomings on Taproot’s part. While the main plot is introduced fairly quickly, the first half is too full of emotional dialogue for my liking. It seems to be just one anxious, fearful conversation after another. The intention might’ve been to build the drama to an explosive end, but I ended up fidgeting in my seat while hoping for some comedic relief. A little visual variety might’ve helped to break up the long dialogues, yet there are no significant changes in the set or lighting during the first half (instead, I spent the time admiring the lovely costumes). 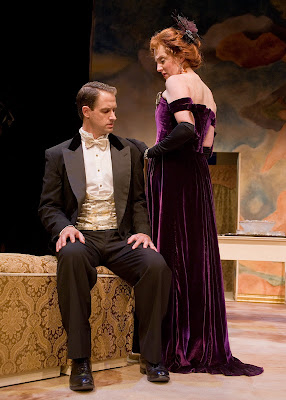 Ryan Childers and Nikki Visel in An Ideal Husband. Photo by Erik Stuhaug.

In contrast, the second half is very enjoyable. With all the drama out of the way, the actors are finally able to let loose with the humor. Aaron Lamb as the partying bachelor Lord Goring is by far my favorite, practically stealing the show from lead Ryan Childers. Lamb, especially when partnered with his obedient butler (played by Joe Monroe) and disapproving father (Nolan Palmer), is the perfect comedian. I also appreciated Nikki Visel as the sly villain Mrs. Cheveley, whose feminine wiles nearly bring her victory. With this more lighthearted second half, Taproot’s wonderful actors are finally able to shine in their respective roles.

Although the beginning of An Ideal Husband may not seem promising, it’s really just a case of delayed gratification; I left the theatre smiling and satisfied. After all, Oscar Wilde was not one to expect perfection of human beings, and neither am I.