“Who’s there?” The words are shouted out into the shadows. I must admit, I didn’t expect for the first five minutes of a play to be done in complete darkness, especially considering the glitzy brightness of the scenes that follow. But so begins a play filled with contradictions, deceit, revenge, and lots of murder. 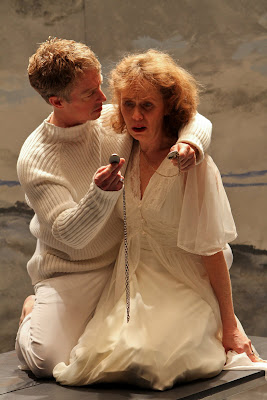 Darragh Kennan as Hamlet and Mary Ewald as Gertrude
Photo by John Ulman
Hamlet is a complicated, well-known play. Written in the early 1600s by William Shakespeare, it is widely considered to be one of his greatest works. Now for many people Shakespeare causes a knee-jerk negative reaction: the language is too hard, the clothes are weird, it’s too fancy, etc… Well, to anyone who feels that way, I would strongly suggest checking out the Seattle Shakespeare Company’s performance of Hamlet, directed by John Langs.

For those who don’t know the story, it involves Hamlet, Prince of Denmark, being visited by the ghost of his dead father, who claims that he was murdered by his brother (aka Hamlet’s uncle,) and that Hamlet should avenge his death. What follows is a long struggle to uncover the truth and dispense justice. It’s a play full of false starts, backstabbing, and mixed allegiances, which is amplified by clever lighting and costumes (which, thankfully, are modern!) The whole show is done in blacks and whites portrayed in front of an empty, grey set, which helps to focus attention on the characters (and the skillful actors behind them.) 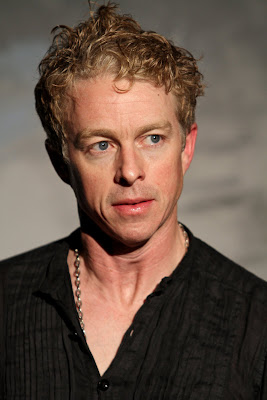 Darragh Kennan as Hamlet
Photo by John Ulman
Taking front and center is Darragh Kennan playing the titular prince. Kennan does a fantastic job of playing Hamlet just on the cusp of madness, always leaving the audiences guessing his true intentions. He knows when to exaggerate his insanity, but at the same time he (in the words of his character) “in the whirlwind of passion … begets a temperance that may give it smoothness.” Not to mention that Kennan manages to maintain his intensity throughout the entire (very long!) play. It’s a pretty impressive display of stamina. That, plus the fact that he has a quality ensemble behind him to play off of, gives this play noticeable concentration and focus.

In all, Hamlet is a very well done play, and anyone who loves interesting stories, full of drama and tension (plus the occasional dark comic relief) would do themselves a favor by going to see this performance. And if you’re worried about the language, fear not! To quote the good prince, it’s just “words, words, words!” The acting can tell the whole story.