Somewhere in the depths of Intiman Theatre a group of seven students have been rehearsing. Those seven students are called the Rough Eagles. They have been creating and cultivating their own piece of theatre. It’s called To Speak of a Dream. 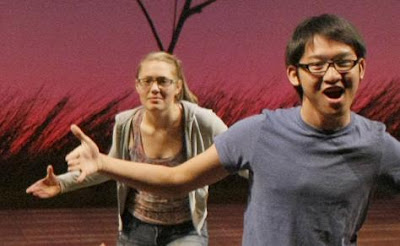 But who are the Rough Eagles? From the program: “Rough Eagles brings together diverse teens from Cleveland and Roosevelt High Schools ... Rough Eagles is about the collaborative process of making theatre as a way to explore big ideas and discover what unites the students, rather than what separates them.” For the Rough Eagles it’s been a long process to get to the stage. They started in August with a weeklong “retreat” where they saw art around the city. Then they took workshops about writing and acting, and then they actually wrote their play.

The play is about heroes and change. The first thing you see in the play is a slide show of images of well known American and international heroes: JFK, Rosa Parks, Martin Luther King Jr., Amelia Earhart, Superman, and President Obama, to name just a few. The play then proceeds to quote some of these people and also to present the Rough Eagles’ personal heroes.

I asked the Rough Eagles about the objective of this performance piece, To Speak of a Dream. “I would say it’s like just talking about personal experiences that maybe you wouldn’t usually tell a lot of people,” said Taylor Christensen, a junior at Roosevelt. “So I think our play, our goal is to try to project the views and perspectives of different people and just different topics and just trying to show people how it like for us, and the controversial issues that’s going on in America right now,” Vincent Nguyen, a senior at Roosevelt, added. “I say it’s showing you perspective. And letting other people walk in your shoes and giving them … a way of seeing what you did during your life,” offers Cleveland junior Ariel Torrey.

Did the Rough Eagles meet their goals? The Rough Eagles say they aren’t actors. But their newness to the stage gives their words a certain honesty and power. The play is thought-provoking, and asks us to change, become better people, better neighbors, and better citizens. I would not be surprised if someday this play, or a version of it, made it onto a professional stage. It has a great deal of potential.

Martin Luther King Jr. once said, “I have a dream.” The Rough Eagles have a dream too, for a better and brighter America. To Speak of a Dream is their step towards actualizing that vision.

Photos, from top to bottom: Taylor and Vincent; Chantel and Rahel; Ariel, Tristan, and Wesley. Photos by Chris Bennion.