Now that I have your attention, let’s talk about the play In the Next Room.

This play is erotic enough that I wouldn’t want to take my parents, but at the same time in a sweet, innocent, romantic way, in a way that doesn’t make me squirm uncomfortably in my seat. I am also utterly won over with these quirky characters. Whether it be tactless, or awkward, or overly-analytical, the actors portray their characters wonderfully, and I fell in love with all their unique little idiosyncrasies. Especially the ever awkward Mr. Daldry (Michael Patten), jumping in at the worst times saying things like, “I like sausages.” And Dr. Givings (Jeff Cummings), talking about the weather whilst administering “treatment” on his patients’ nether-areas. And Mrs. Givings’ (Jennifer Sue Johnson) thoughtless comments on wanting to have “a few extra kids around” just in case one of them dies. And… heck, I like them all! 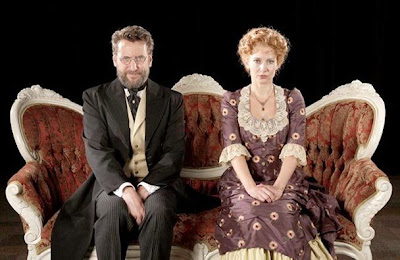 Jeff Cummings as Dr. Givings and Jennifer Sue Johnson as Mrs. Givings
Photo by Chris Bennion
This comedy had me laughing, but also surprised me with moments of solemnity, insight on life, and endearing tenderness. The time in the theater passed by quickly. The idea so absurd, the script so clever, I was thoroughly entertained the entire 2 hours and 15 minutes that the play ran.

Having only ever been to big productions at the Paramount of at 5th Avenue, I was also pleasantly surprised by the intimacy of the ACT, where the play is being shown. Additionally, the late-18th century set and costumes were gorgeous and very well suited for the play.

Note: This play contains adult material and is recommended for ages 16+.