Review of Robin Hood @ Seattle Children's Theatre by Bethany B.

As a toddler my parents took me to Seattle Children’s Theatre at least twice a year. It was a big, exciting excursion, and in the plays we saw magic come alive, and adults become the children they portrayed. SCT has and probably always will be one of my favorite play houses in Seattle for just those reasons. It’s arts just for kids. It’s magical and everyone is always entertained, whatever the age.

Robin Hood was different. To start, the things I enjoyed about the production. For one, the actors did a simply stunning job of their roles. There were only four actors for over fifteen roles, and all the characters made clear distinctions in an amazing way. The only issue was Maid Marian, who occasionally dressed up as a boy, the actress who played her also had a role as one of Robin’s Merry Men. Believe me; it’s even more confusing in real life.

The stunts were incredibly impressive, what with sword play, tricks, and climbing and sliding all over the set. It made the whole play more explosive and exciting, and gave even more credit to those talented actors. Speaking of the set, the play gets major cool points for that too. In the beginning, it seems like a basic stage, but as the play unfolds, the stage becomes more complex. The secrets of the set were slowly told as each part was climbed over, spun, and crawled under. In truth, casting, set, lights, and costumes were all incredibly well done, with precise expertise. 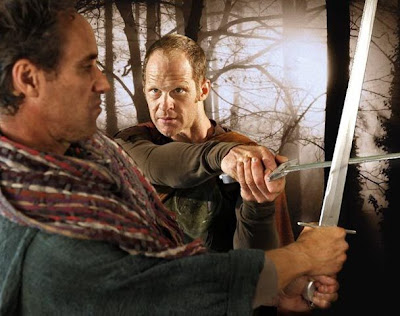 
But sadly, that’s not all I have to say about this performance. My magical Seattle Children’s Theatre fell short of its usual standards. It’s true that I laughed for a good part of the play, and enjoyed it well enough, but it didn’t feel like SCT. The humor included junior high boy/men in mid-life crisis jokes, and it was degrading to the standard. Also, back in my day as a seven-year-old, if there was a romantic mini-plot, the climax was holding hands, or a long endearing look. However, Robin Hood got a considerable amount of smooching time and a few too many suggestive comments for a children’s play. If I was going to any other playhouse in Seattle, I wouldn’t count it as an issue. But the wiggling two-year-old in front of me, and the grade-schoolers surrounding me, makes it totally unacceptable to diverge into soap-opera territory.

In my mind, the whole point of a children’s theater is to get kids excited about arts. Maybe it’s the first play they’ve ever seen; maybe their memories of SCT will lead them to continue on going to the theater. But also, this is what makes kids want to try acting, or all kinds of different art forms-singing, dancing, painting, whatever it will be. This playhouse is just about the kids, not the complex interests of late-teens, adults, or school teachers.

Robin Hood was full of good aspects, but the story of Robin Hood is full of potential, and perhaps SCT just tried too hard. In truth, the problem was that SCT tried too hard. The developing of the story, the lessons that were meant to be shown, and the need to appeal to everyone, and the fact the play had to finish before an eight-year-olds bedtime, was simply a net cast too wide. But, although I do have these gripes with the play, in general, I did still enjoy it. The production poured with talent, and it was exciting to watch. And besides that, the crowd in attendance (the mostly under four feet variety) seemed to enjoy it too.