Review of Evil Dead: The Musical @ ArtsWest by Iman B.

"Guess who's evil now!” is both the proclamation and the loud, obvious, and in your face statement that a character would shout after being consumed by the evil dead. The simplicity of the most frequent line in the play exemplifies the smart aleck vibe the play has.

Ash, the main character, his girlfriend, his best friend, his best friend's hook up, and Ash's sister go out to an abandoned cabin in the woods over spring break for some fun. What could go wrong? The set up is one for a cliché horror story. Frankly, the story is a cliché horror story, but the horror story turns into a smart aleck approach to horror; Going all the way back to the roots of horror – humor. Instead of scaring you to death, the actors cause the audience to laugh to death.

The small cast is able to transition from scene to scene in the intimate theatre where the front row audience members are drenched in fake blood; just a tease of some of the “horror" in the play. 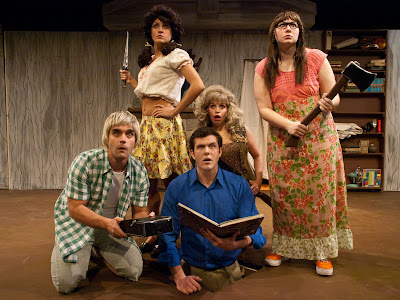 The script is loaded with quirky references to everyday life, other plays, and movies that keep the audience roaring with laughter. It also in a way keeps you on your toes, not with suspension, but rather with the script’s ability to scream out the implied when you thought it was implied. The thrown at your face rhetoric keeps you guessing what is going to happen next because, frankly, you can't tell what to expect: the expected or the unexpected. If it's expected, will I have to just mentally imply it, or will the actor colorfully yell it at me? Also, the unexpected constantly switches from cliché responses to original and outlandish statements that keep the audience on their toes and never allows them to get bored.

The songs are hilarious. Based around everything you wouldn't expect them to say when using their vocal cords, but manage to do so anyway. They take tid bits of the script, load them into the song and present them in a profane and unconventional way that will keep any audience "deathly" content. 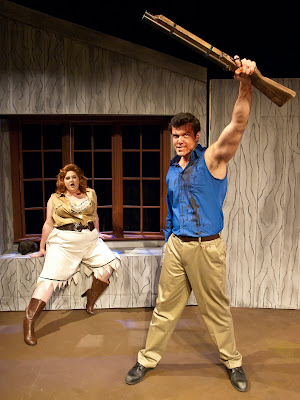 Kate Jaeger and James Padilla in Evil Dead: The Musical

Walking away from the play you realize, “Heck I should enjoy life and every moment of it because, to be morbid, who knows when evil is going to sweep me up and take me to the afterlife.” This play is a fun and funny experience for anyone looking to go and have a good laugh. Granted, I must give playgoers a fair warning: make sure you are going with weathered ears and mature individuals.