Apologies for the terrible title.

A story in today's USA Today reports that a psychologist named Jean Twenge has written a book called The Narcissism Epidemic: Living in the Age of Entitlement in which she claims that today's teenagers are more self-involved than previous generations'. She says that y'all's (again, apologies) "preoccupation" with facebook and myspace is evidence that you just can't get over yourselves, and she thinks it's unhealthy.

Over at Ypulse, an actual member of Generation Y, Managing Editor Meredith Sires, sees this as another example of the media's incessant "generation bashing." She finds Dr. Twenge's conclusions a little simplistic, and suggests that all teenagers, forever and ever, have been narcissistic, it's just that now you have more (and more public) ways to express it.

What do you think? Take the poll. (And thanks to Meredith at Ypulse for the phrases "self-promoting" and "attention-seeking" which I use in the poll.) 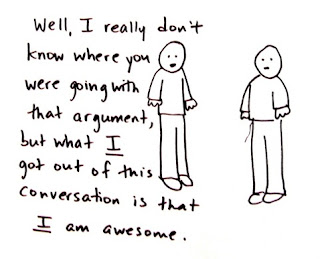 Photo by whufwhuf on photobucket.