Art & Copy, as its name suggests, is a film about the intersection of art and advertisements (or copy). This documentary takes us back to the early ‘60s when the advertising industry really took off and began to create truly memorable and unique pieces of work. The examples shown in the movie are a hoot, including George Lois’ series of covers for Esquire magazine featuring, among others, Mohammed Ali as a martyred Jesus and Andy Warhol drowning in tomato soup. Also featured are the classic Volkswagen Beetle ads and a campaign for a 1960s airline where all the stewardesses wore mod spacesuits and bubble helmets. Leading the audience through the highlights of the last 50 years in advertising is where the film really shines. It showcases some truly great ads and presents us with their context via narration and interviews with the people who actually created them. It also contains some shocking statistics (the average city-dweller views 5,000 separate advertisements ...every day!), but mostly the film’s main argument is that advertising is essential to capitalism and that it’s not necessarily a bad thing- occasionally it truly is art. 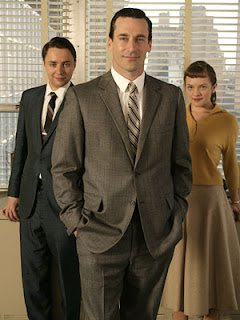