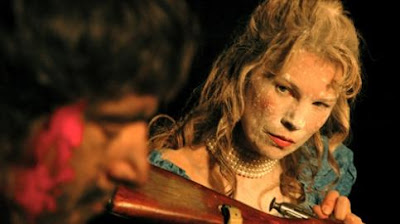 
Tucker: When the curtain opens on Gloria’s Cause, you are really not sure what to expect. There is no description in the program of what you are about to see, and any descriptions you can find online are sketchy at best and vary wildly. This mystery grows more when the actors come out on stage long before the play begins. They stare at you. You are freaked out, a little. And when the play begins, two forms appear at the back of the stage. Here is what will happen in your head: “Wait. Are they naked? Uhhhh. They look naked. Yep, they are definitely naked. Okay.” And things just get better from there.

Dana: The naked ladies leave pretty early on, and a sitting man begins a monologue while another actor stands center-stage eating pie. Other actors enter, exit, taking on different characters and personalities, breaking into rock songs or violent dance sequences. It’s not clear what’s going on, but you get the sense that it’s something big. Sometimes the actors are telling stories you recognize, but things don’t really fit. The word “freedom” is thrown around, and you begin to see that this show is about America. Maybe. 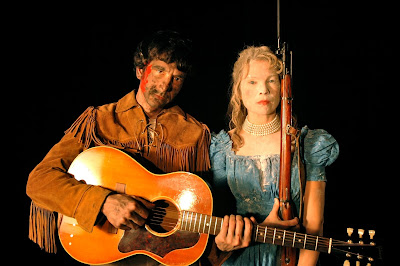 
Tucker: For me, at least, I watched this play always a little confused. Something very cool is going on, and it is very often funny, but I can’t figure out what the hell it is half the time. But really, that didn’t bother me too much. Because even though I may not know what they all mean, the bald eagle performing a striptease, the Ben Franklin action figure, the musical number about slavery, and the very, very drunk George Washington appearing on Jerry Springer Live are downright hilarious. And the live band is awesome. I won’t say that this play made sense to me, but I can say I had fun.

Dana: It didn’t make sense, sure, but I do feel that the show had something to offer, even besides the uncontrollable giggling. Every now and then I had the disconcerting feeling that maybe the supreme ridiculousness had gone full circle and arrived at something meaningful. Sometimes a scene or a sentence would jump out at me, knocking me back in my seat. I felt myself laughing, and then all of a sudden I was overwhelmed by disgust, or sadness, or fear. And then the actors start impersonating the founding fathers and we’re back to hilarity again.

Tucker: All in all, go see it. I left the show having had a great time, because Gloria’s Cause offered things that I had never experienced before. And it was cool. See it for yourself, laugh, guess, and have a good time. Everyone who sees this show is going to see something wildly different in it, and that’s what is so excellent about it. It refuses to be pinned down, and does nothing but its own thing. So, for the naked ladies, drunk George, or the 70’s band, get your butt in the seats before this one passes you by.