Review of The Cryptogram @ Seattle Public Theatre by Jessica B.

Reading David Mamet can be a profoundly frustrating experience. Anyone who has experience with Mamet’s work can spot his style from a mile away: sparse and mundane language, full of repetition and characters with a propensity to misunderstand each other. Such is the case with The Cryptogram. The play centers on the taut, frayed communications at the center of one family. Ten-year-old John (Rowan Calvert) is eagerly awaiting his father’s arrival; tomorrow, he and his father will take a camping trip out into the woods. But even as the hours tick on and John’s father has not arrived home, John waits, drifting between fitful rest and chaotic wakefulness. Yet John senses that his mother, Donny (Emily Grogan) and family friend Del (Richard Nguyen Sloniker) know something that he doesn’t. The things Donny and Del say to each other don’t seem to make sense and John struggles to discover what they are keeping from him—and each other.

The stops and starts in The Cryptogram’s dialogue, the crowding of the language, and inability of the characters to aptly communicate can fall incredibly flat without a talented cast. With a talented cast, however, each facial expression, stray gesture, and chopped syllable becomes a clue of the utmost import. 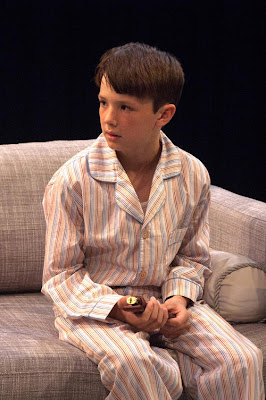 11-year-old Rowan Calvert as John in The Cryptogram. Photo by Paul Bestock.

Seattle Public Theater (also known as the Bathhouse Theater) at Green Lake has provided such a cast. The cast fills in the sparse “Mamet-speak” and parses together the fragmented consciousness at the center of their respective character. Without such skill, under the careful guidance of an excellent director (such as this production’s Kelly Kitchens) the play would simply unravel and disintegrate into a mind-numbing and laughable lack of communication.

But with this wonderfully talented cast, one need not fear such an end. Grogan and Del demand much from the audience with the careful presentation of their characters; every action, inflection, and twitch is full of thought and can be attributed to their great talent. The young newcomer, Calvert, likewise handles the challenging script with great skill, delicately balancing the innocence of childhood with the devastating realities of adulthood. The Seattle Public Theater’s production of David Mamet’s The Cryptogram is dissonant, aggravating, frustrating, terrifying, but most definitively intriguing—drawing in the audience with the powerful and subtle skill of Grogan, Sloniker, and Calvert. I was held captivated by the puzzle of this family and the theater’s artful use of suspense had its desired result: I found myself holding my breath at the end, enveloped in the story. And that, my dear readers, is what good theater should do.