Review of Sound Off! Semi-Final #1 by Allison C. 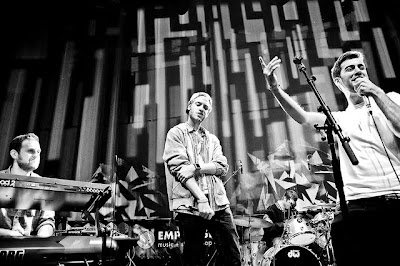 2nd place winner Sam Lachow
Photo by Brady Harvey
In it’s eleventh year, EMP’s annual Sound Off! kicked off this past Saturday with its first round of semi-finalists. The stage was rocked by a wide assortment of musical styles: The Unibroz, Dungeon Science, Sam Lachow, and The Deep Wake. A 21-and-under battle-of-the-bands-like competition, Sound Off! carries a hefty prize. First place winners will perform at Bumbershoot 2012 and live on 107.7 The End, and receive gear, studio time and music industry consultation. The competition has helped catapult bands like The Lonely Forest, Dyme Def, The Globes, Brite Futures, New Faces, Sol, The Lonely H, and Schoolyard Heroes into Seattle’s revered music scene. This year’s Semifinal round #1 was an impressive and entertaining show. 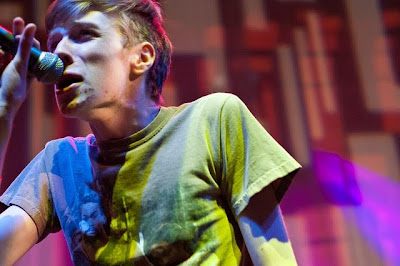 The Unibroz
Photo by Brady Harvey
First to take the stage were The Unibroz. This electro-hip hop group from Seattle put on, by far, the most entertaining act. With heavy electronic-funk influences, and soulful lyrics, they take on comical subjects with serious intensity. The resulting attitude can be compared to that of former Sound Off! winners Brite Futures, or internationally known hip hop trio Das Racist. Songs about “sweet and sour dipping sauce” and a “crispy chicken saxophone” were fun and catchy. Their infectious attitudes started Sound Off! with a bang. 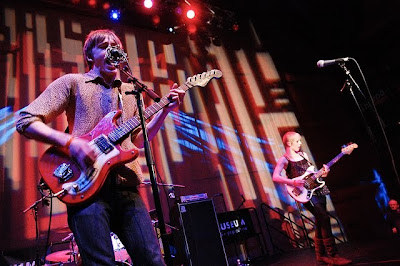 Dungeon Science
Photo by Brady Harvey
Following the Unibroz was Tacoma-based Dungeon Science. With just a three-piece band, a bass, guitar, and drums, they managed to pack in a lot of punch. Quite contrary to Unibroz, they are a garage rock-soul band. Their dirty vocals and heavy, bluesy guitar give off a retro feel, similar to that of the Black Keys. While their performance was a strange jump from electro-hip hop, Dungeon Science was still able to transform the EMP into a smoky bar. The messy music is infectious. Their set seemed to end all too quickly.

Next was the highly anticipated Sam Lachow. Lachow, originally from Seattle, filled the stage with his large and very talented band. He pairs hip hop with jazzy instrumentals and vocals, and his care-free lyrics guarantee a good time. Lachow focuses on using live musicians instead of sampling prerecorded artists. This made the show exciting, engaging, and impressive. Ariana DeBoo for example, who sang vocals for Lachow, has a powerful soulful voice. She was fantastic to listen to. Lachow made for a great show. His sound is contagious and interesting, his flow good, and his performance entertaining. He was the clear crowd-pleaser. Sam Lachow won second place, and a spot in the Wild Card pool. The other two semifinals will add two other wild cards, and EMP’s Youth Advisory Board will select one to compete in the finals. 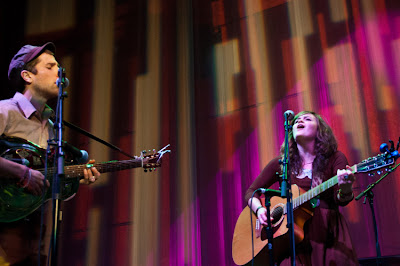 Sound Off! Semi-Final #1 winners, The Deep Wake
Photo by Brady Harvey
Last, but not least, was The Deep Wake. Hailing from Bainbridge Island, they gave the 1st semifinals a peaceful, harmony-filled conclusion. Singers Adam Foley and Laura Jean Anderson hit every note beautifully. Adding in guitars, banjo, and fiddle, they produce a folksy, twangy sound. Their harmonies wowed the crowd, their soft lyrics delicate and meaningful. With a powerful finish, they took home 1st place. They will be performing at the Sound Off finals and have a shot at winning its fabulous finals, though, with their talent, they were bound to get noticed either way.