Review of I Am My Own Wife at Seattle Repertory Theatre by Olivia M. 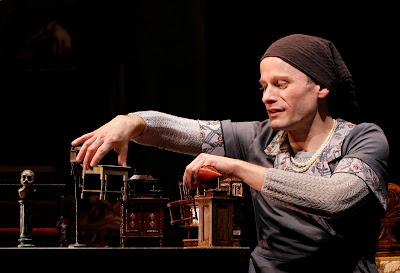 Nick Garrison in I Am My Own Wife at Seattle Repertory Theatre. Photo by Chris Bennion.
For me, going to see plays, either for work or just for fun, can be a total hit and miss. Sometimes I just can’t connect with the characters or the storyline and then the night becomes a total drag, but sometimes, everything goes just right, and you just have to sit back to enjoy and respect a great work of art. That’s how it was when I saw I Am My Own Wife, which is both immensely interesting in subject and really well crafted.

Switching seamlessly between characters, Nick Garrison performs an interpretation of the playwright’s journey through meeting and getting to know one Charlotte von Mahlsdorf, who is summed up quite perfectly by a quote from the play: "It seems to me you’re an impossibility; you shouldn’t even exist," which is exactly how I felt upon learning the details of Ms. von Mahlsdorf’s life. Starting her life as Lothar Berfelde in East Berlin, she fought and killed her abusive Nazi father, and survived both the Nazi and Communist regimes, which is impressive even before you learn she was a transvestite through it all. She was an extraordinarily courageous woman, secretly preserving ordinary items which would one day illustrate early 1900s German life, and with them made a museum which became a community hotspot for the East Berlin homosexual scene, which was forced into hiding in the highly oppressive regimes of the time. 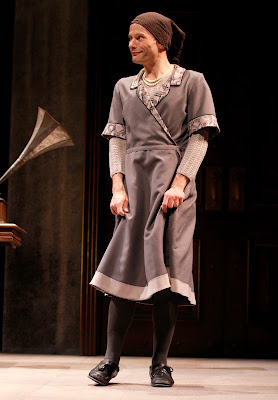 Nick Garrison in I Am My Own Wife at Seattle Repertory Theatre. Photo by Chris Bennion.
Playwright Doug Wright did a fantastic job of sucking me into the emotional ups and downs of his experience with von Mahlsdorf, as well as emotionally attaching me to her life, regardless of the controversies that become apparent. Late in the second half of the play we learn there are some inconsistencies to the stories given by Charlotte, including accusations of her being a Stasi spy, but, like the playwright, I found it hard to not feel affection for the late heroine.

For this review, it’s hard to restrain myself from bombarding you with a whole bunch of things I want desperately for someone else to know about in some sad attempt to discuss this play telepathically, and that’s how I know I can safely and wholeheartedly recommend it. The show runs until March 10th at the Seattle Rep, and I hope for your own sake you take the time to watch it, appreciate the story and the fabulous acting, and even experience a wonderful “aha” moment as you understand the meaning of the title. You’ll be glad you did.

I Am My Own Wife
Seattle Repertory Theatre
EXTENDED through March 10, 2012
NOTE: Contains mature material. Recommended for ages 16+