Holly at Teen Tix asked me if I was interested in interviewing David Hogan and Angela DiMarco from reasons to be pretty, opening at ArtsWest this month, and I immediately said yes to my first ever Teen Tix interview. After struggling to find a good time that would fit all of our schedules, we were finally able to squeeze 30 minutes in on a Tuesday, and I managed to be late. 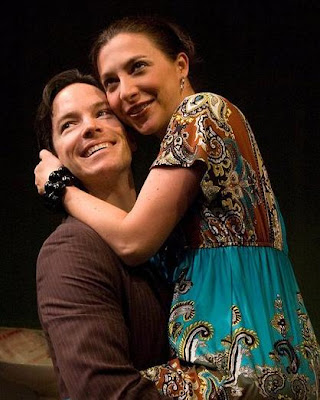 David and Angela acting together in 13th of Paris last spring at Seattle Public Theatre
As I ran into ArtsWest, with apologies flowing from my mouth before even a hello, I noticed that Angela, David, and Holly were just chatting away. Apparently they had all done a show together at ArtsWest a while back. We went downstairs into the greenroom (that was more like a laundry room with couches) and set up for our interview. After propping the tripod up higher with several large books while Holly made reference to How I Met Your Mother [eds note: Having never seen How I Met Your Mother, any reference to said program was inadvertent. - Holly], we started the interview.

The first thing I noticed was that this married couple was completely lovable. The second thing I noticed was that Angela did a lot of the talking. It was great because David would chime in with something really interesting to say and he and Angela kept the interview lively. I would have loved to stay and chat more with these two fantastic actors, but we both had rehearsals to get to, so those questions will have to wait for another time.

See Angela and David in reasons to be pretty @ ArtsWest
September 8 - October 2
Recommended for audiences ages 16 and up for adult language and situations
More info at artswest.org