Review of Romeo & Juliet at Intiman Theatre Festival by Abigail A. 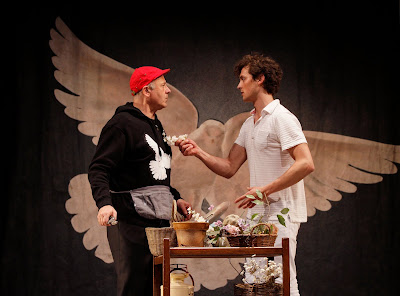 Friar Lawrence (Allen Fitzpatrick) and Romeo (Quinn Franzen)
Photo by Chris Bennion
I’m going to try the best that I can to tell you about the Romeo and Juliet play at the Intiman Theatre from a non theatre-literate perspective. Okay, let’s go.

Number one: don’t believe your friend who told you that it would be boring; in fact it will be very entertaining. When you go to this play (which you will because my amazing review will persuade you), you will laugh at jokes that you originally did not even think would make you chuckle. This is not only because of the great chemistry between the actors in this play, but also because of the way it’s presented. When Romeo (played by Quinn Franzen) pronounces his love to Juliet during the famous balcony scene, Franzen is running up and down the stairs in the theater and interacting with the audience. It is truly amazing.

Second, Shakespearean language is not that hard to understand. If you paid attention in class for about an hour you probably won’t have much trouble interpreting it into "easier" vocabulary. Even if you are in the unfortunate situation where you have no idea who Shakespeare is, you’ll understand what is being said, just be prepared for an ancient type of speech. 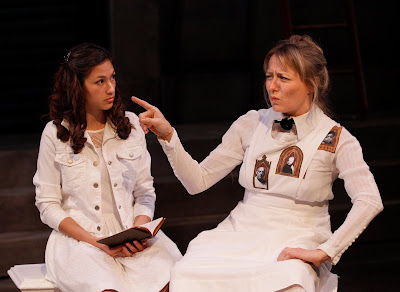 Juliet (Fawn Ledesma) and the Nurse (Marya Sea Kaminski)
Photo by Chris Bennion
Number three, this interpretation of Romeo and Juliet is not dated; it gives a fresh approach to a classic tale. The music being played in the background gives me a sort of Michael Jackson Thriller vibe, especially during the party scene at Mr. Capulet’s house. The costumes are interesting, I was intrigued by the color differences for each household (Capulets and the Montagues). The set alone tells a story, with pictures of dead family members, showing the bloodshed on both sides. Did I mention Mercutio’s wit and charm, (and interesting leggings, I suspect Urban Outfitters)?

If I can do it, you certainly can. Go see Romeo and Juliet at the Intiman Theatre this summer and see the classic love story.