To quote the all-wise and ever-helpful Sassy Gay Friend of YouTube fame, “What are you doing. What. What. What are you doing.” Right now, I hope that your answer to this question is not “Sitting at home on Facebook,” or “Watching reruns of Project Runway” (Mondo was robbed), because cool things are happening. Weird things. Funky things. Things that you are not quite sure the significance or meaning of, but that make you laugh all the same. Things with strange instruments. Things with dirt. 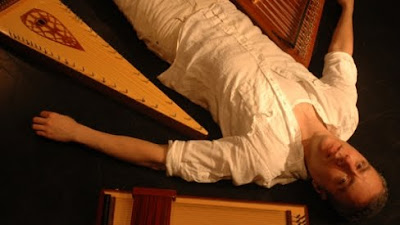 These things are all often happening in their own right, but rarely do such auspicious events combine into one, funky, eclectic whole. Right now in Seattle, it has, in My Arm is Up in the Air, in the shoebox-like Studio Theater at On the Boards. The one-man, one-hour show stars Charles Smith, a long-time fixture of Seattle fringe theater. Smith certainly makes the most of his hour, and the show reaches in about a thousand different directions. Smith digs into his childhood, pop culture, and Seattle history. The aforementioned dirt comes into the picture when Smith discusses the 1916 Denny Regrade, which was at the time the largest earthworks ever. Seattle leaders decided that Denny Hill had been inconveniently placed by God and was blocking off the northern growth of the city, and so they decided to completely flatten it, to the surprise and anger of some local homeowners, who were stranded atop sudden towers of earth after refusing to abandon their property. As Smith discusses the regrade, dirt rains down from the ceiling, scattering across the stage and his body, as he revels in it.

The numerous musical interludes that Smith scatters through the work are as funky as the monologues. Smith sings and plays on the hammered dulcimer, autoharp, and bowed psaltery, which I had never seen until that night and may never again. The songs, in numerous languages, often fail to live up to the rest of the play. Certainly they are a novelty, but they pale in comparison to Smith’s monologues. Words he plays like a master, but the music and singing lacked the same expertise and quality.

Though the monologues are excellent, teenage patrons must be warned that some of the pop culture references in this show are obscure. Really obscure. Like before-1980 obscure, which as we all know is before the dawn of recorded history. I followed Smith through The Brady Bunch references, kept up with the Clinton administration jokes, but in some places just got plain lost. Advice to teenagers: laugh along with the thirty- and forty-somethings while nodding reminiscently when this happens.

I will not remember My Arm is Up in the Air as the most interesting show I saw this year. Nor will I mark it as the funniest, wittiest, kookiest, craziest, most unexpected, beautiful, or fascinating show of 2011. To its credit, this is because it tries to do all these things, and it succeeds in defiantly being its own, little, weird self.

My Arm is Up in the Air
On the Boards
FINAL NIGHT TONIGHT: Monday, March 28