Review of The Beams Are Creaking at Taproot Theatre by Callan C. 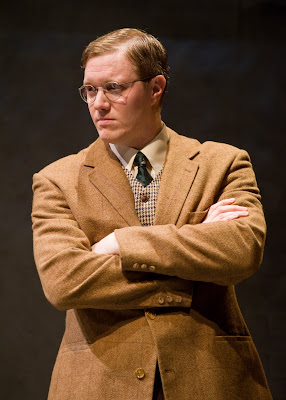 Matt Shimkus as Dietrich Bonhoeffer. Photo by Erik Stuhaug.
I’ve heard it said that good art makes you think. If that is the case, then The Beams are Creaking at Taproot Theatre definitely fits into the category of good art. As the true story of German pastor and theologian Dietrich Bonhoeffer, a martyr in the German resistance during World War II, the play forces the audience to question religion and morality just as Bonhoeffer did. The show begins in Germany in 1933, just as Adolf Hitler and the Nazis are taking power. Bonhoeffer quickly becomes appalled at the Fuhrer’s overwhelming dominance of the government, and at the constricting hold being placed on the German Church. As the book burnings, arrests, and persecution of Jews escalate, Bonhoeffer knows he must take action, but struggles to choose between resistance and all-out treason. His decision has the power to not only affect his life and others’, but to change the course of the war.

Though stories of sacrifice during World War II are not uncommon, Dietrich Bonhoeffer’s is one that is seldom told. Thankfully, Taproot Theatre’s production of The Beams are Creaking allows Bonhoeffer’s self-sacrifice to be seen and appreciated. The characters, although of a different time and place, are relatable. Bonhoeffer himself (played by Matt Shimkus) is a charismatic leader. In Taproot’s intimate setting, the play takes on a personable quality, as though these characters are inviting us to witness their lives up close. An unexpected aspect of the play is the reflection of Bonhoeffer’s love for music; church hymns, in particular, add a soft sense of hope to the production. While I noticed minor errors in speech and song, they were few and to be expected on opening night. I appreciated the timing of the play, which moves quickly without overly long scenes or boring dialogues. The juxtaposition of humor and seriousness is a nice touch – even in seemingly dire situations, the actors are able to get an unforeseen laugh from the audience. Although a historical play of this type could be dull if not performed well, I found this particular show to be engaging and somewhat suspenseful. Even when I already knew the ending, I still found myself wondering what would happen next.

I cannot vouch for the 100% historical accuracy of this play. There are moments that seem a little questionable, including one where a prison guard shows amazing sympathy for Bonhoeffer. Yet despite such moments, this play is educational and thought-provoking. Even for teens living in Seattle in the 21st century, this production still holds questions and ideas that are new and relevant. So if you like good art, try The Beams are Creaking and prepare for some serious thought.

The Beams Are Creaking
Taproot Theatre
Through April 23