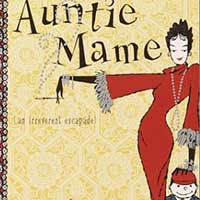 A review of Auntie Mame
at Driftwood Players
by Jenny S.

Auntie Mame, based on the 1955 fictional account of a boy’s relationship with his freewheeling aunt has enjoyed many incarnations as a novel, play, movie, musical, and movie musical. Visual productions of Mame Dennis’s life tend to feature lavish period costumes, million dollar sets, and actresses of illustrious fame and renown in the title role. While the Driftwood Players production of Auntie Mame boasts none of these assets (the theatre is small and dingy, the costumes clearly rented from the community, and the cast comprised of local actors who have not, alas, quit their day jobs) nonetheless, this is community theatre at its best; a wonderful interpretation of Lawrence and Lee’s witty text. Once one becomes accustomed to the smaller scale on which The Driftwood produces its shows, it is easy to note the beauty and huge effort that went into this particular production. The Driftwood is a nonprofit organization which depends heavily on community support and volunteers to continue its existence, an existence ever more precarious in these times of financial hardships which are hitting arts and culture institutions extremely hard. Now more than ever we must continue to support all art forms, and continue to appreciate and value the institution of community theatre.

Mame Dennis’s crazy adventures take place over a span of about thirty years, starting in the days of prohibition and jazz in the 20s, and spanning into poodle skirt wearing, chocolate-malt drinking world of the 50s. Mame’s character of carefree, living, loving, learning abandon has captivated audiences worldwide. The story of a kind hearted eccentric who takes in her orphaned nephew in order to “show him the ways of the world” is equal parts amusing and touching. The Driftwood’s production includes many creative elements that make this portrayal of the play individual and innovative. Little affections like playing music of the era during set transitions, which altered as the play progressed throughout the decades, transport the viewer to an earlier time. Local artist’s works are featured in the lobby of the theatre as well as in the set of Mame’s New-York City art deco apartment. Among the cast itself, Alyson Soma shines as a fine comic actress in the role of Agnes Gooch, a woman hired as a secretary to record Mame’s life story on a rickety type-writer into a multi-volume epic. Melody Mistlin and Laura Crouch also steal their scenes, respectively as a Broadway actress and a jealous Southern belle. Mame, a show written and directed (in this case) by men, is dominated by strong, often hilarious, female characters. Mame herself shines, under her slightly askew wig and fraying evening gown. Margaret Bicknell takes on the title role with class, talent, and tireless labor; she is scarcely ever off stage for more than three minutes at a time. She truly carried the show.

“Live! Live! Live! Life is a banquet!” bursts out Mame, fighting the small mindedness of bigots, anti-Semites, and uncultured fools who continue to infringe on the education of her darling nephew. “And most poor sons of bitches are STARVING to death!” This most famous line of the show encompasses the message depicted in the somewhat lengthy production. Whether on Broadway or in Edmonds, Mame’s message of creativity and love for life leaves audiences with what can only be described as a warm glow. Imperfections and all, this fine production is highly recommended.


Auntie Mame plays at Driftwood Players,located in Edmonds, now through May 2nd
Visit www.driftwoodplayers.org or call 425.774.9600 for more information