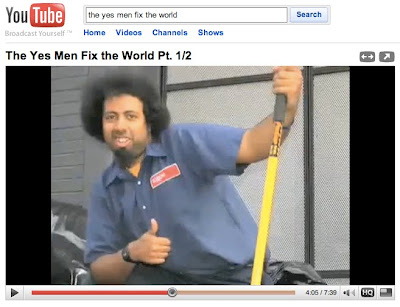 Look what we discovered while watching clips from the documentary The Yes Men Fix the World (running this week at Northwest Film Forum and our Pick of the Week): Reggie! Yes, that's right, local treasure Reggie Watts took a break from being a musical comedic genius to play the role of "Reggie Watts," an Exxon janitor who donated his cancer-ravaged body to produce thetest version of Vivoleum, ExxonMobil’s new fuel made from the human flesh of climate change victims. At least that's what a conference full of oil and gas execs heard when the Yes Men impersonated Exxon at Canada’s GoExpo 2007.
Don't you want to know how those oil and gas execs reacted?