Review of The Threepenny Opera presented by Seattle Shakespeare Company at Intiman Theatre by Rachel T.

“Art isn’t nice,” says Macheath, main character of The Threepenny Opera, with a smirk. Art is humanity expressed through song, dance, canvas, and more. It is the representation of what mankind truly is – and when you get down to it, the fundamentals of mankind aren’t always lollipops and rainbows, as Bertolt Brecht, the playwright, shows us with this savage satire. In eighth grade, I was forced to learn the opening number of The Threepenny Opera, "Mack the Knife," a song about a suspiciously shark-like Macheath and his lengthy list of crimes, from rape to robbery. Ironically, the number was added to the show at the last minute, but became the most well-known song. So I went to see the play expecting a dark musical drenched in violence, lust, and thievery. 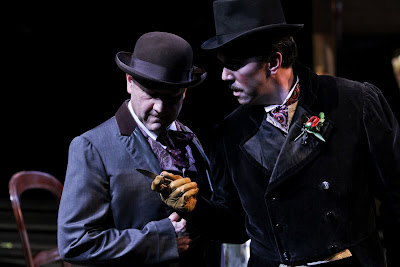 It is immediately evident to me that the acting is top-notch. Normally when I see plays, it’s easy for me to tell which actors are better at their jobs than others. However, with The Threepenny Opera, each actor/actress, no matter how small or big their part, does a breathtaking job. John Bogar carries the play as Macheath, a deceivingly genteel knife-wielding leader of thieves and charmer of ladies, feared by all. He reminded me of a twisted Jay Gatsby. Russell Hodgkinson is J.J. Peachum, a shopkeeper whose slate isn’t as clean as it appears to be, doing his best to bring the baddie (who has stolen his daughter’s heart and purity) down. Although these two are enemies, it’s difficult to identify the protagonist from the antagonist, since both have many immoralities. The sets are simple, (for example, just a bed and crates in one scene), but the actors’ skills leave you riveted on them and not the semi-barren stage. Even the use of shadows on the wall behind the characters is used artistically to subtly (or not so subtly) convey messages about what is going on. 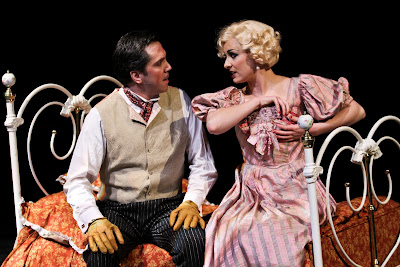 But this production isn’t only strong with its acting; it is equally powerful with its singing. Allison Standley as Polly Peachum, the innocent (or so she seems) love-struck girl whose fallen head over heels for Macheath, has a soprano voice that will give you goose bumps. Her rival Lucy, (Gina Marie Russell) another competitor for the criminal’s heart, has an equally spellbinding voice, but deeper and throatier, which creates an amazing effect when the two combine talents for a duet. One pianist singlehandedly accompanies everyone throughout the whole play, creating a more traditional and close-to-home feel than an entire orchestra. At one point one of the thieves steals the pianist's bench, but he resiliently continues his music. Another interesting aspect of The Threepenny Opera is that the audience is kept very involved. Characters frequently break the fourth wall and leave the stage, walking through the audience, making you really feel like part of the action. This is a splendidly done reboot of a darkly fascinating tale that will leave you thinking about what we do and why we do it. Two thumbs up!