Confession: At the start, I wasn’t really thrilled about doing this review. Don’t get me wrong—I think poetry is super-awesome and have zero problem with it, but it just wasn’t something that I normally would have gone to. Regardless, there I was, in Benaroya Hall on a Tuesday night, about to hear a poet that I previously knew nothing about. 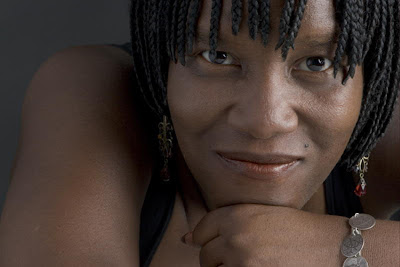 This, however, was not a huge problem. As it turned out, Patricia Smith is one of those special people who really require no introduction. From her first moments on stage, she was captivating. Her poetry can wax long but never frivolously. She is always in control of her words, and she reminds you of it. At points, the raw power of her words grabs you by your shoulders and flings you across the room into the wall. Her introduction described her style of writing as “trying on many pairs of shoes, seeing which ones are most uncomfortable, and making them dance.” And she did.

The dance was not always pretty and simple. Her remembrances of racism growing up in Chicago and the brutality of life after Hurricane Katrina at times made us cringe, shifting our weight in our seats. This was the measure of her power as a poet; to make us look unflinchingly and directly at what we had previously only seen on television and in textbooks. 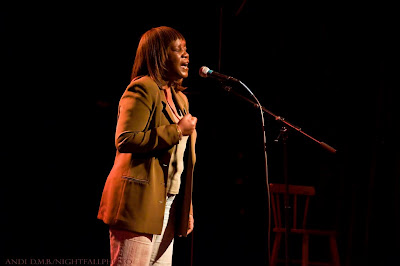 
So much of her power to do that came from her ability to tell the stories that mattered. Her poems spoke so naturally. More than that, she told her stories not only as herself, but as dead men, hurricanes, and an enormous variety of people. Every time she did, it felt organic, real, and purposeful.

My partner in crime said it better than I that evening when she reflected afterward, “She had the words and the rhythms that my brain craves and wanted to hear. She had the passion that makes storytelling a unique art.” That passion was everywhere in her work; when she made eye contact with me while she was reciting, I felt like I had been zapped.

Patricia Smith brought everything we needed that night. The right words, the right energy, the right stories, the right mood. She was the combination of everything that makes a poet great, and reminded all there that evening about the raw power of language when used to its full potential.

Patricia Smith was a one-night only event. Learn more about her work at wordwoman.ws. Next up at Seattle Arts & Lectures, and unmissable event for book-lovers: