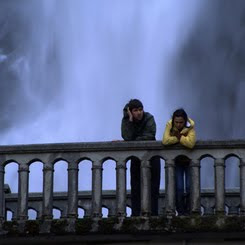 If the realization hits you about an hour into Cold Weather that absolutely nothing has happened yet, my best advice is to calmly collect your things and exit the theatre as unobtrusively and politely as possible. The bad news is that you’re dead right—nothing has happened. The worse news is that for the remaining hour or so, it only gets worse.

I exaggerate a little. True, stuff happens in Cold Weather. The problem is that it happens at about intervals of about half an hour. And when it does happen, it is done in a manner that is so clichéd, contrived, and sophomoric that it’s almost worse than nothing happening at all. I spent large sections of this movie intently wondering if it would be more satisfying to drive an ice pick through my own head or the head of the grating main character Doug, who is as moronically ridiculous as he is coma-inducing. Even more regretfully, the two mildly interesting characters abruptly and inexplicably disappear for large sections of the film, leaving the audience like castaways on a desert island, desperately trying to find a way off

Part of the problem may have been that I had high expectations for this film. Promotional materials touted it, saying “[Director Aaron Katz’s] coy and funny thriller keeps audiences guessing, while sharpening his singular cinematic style. Cinescope hailed it as ‘the greatest American film of the year,’ and we happen to agree.” After reading this and watching the actual film, I can really only come to the conclusion that we were either watching different movies, or that I am a complete and utter moron. However, I don’t think I’m alone, given that several other patrons got up and left in the middle of the movie. I envy them.

The fact of the matter is that for every second of footage that might be remotely considered thrilling (if you squint really hard, maybe) there is about five solid minutes of absolutely nothing happening whatsoever. Director Aaron Katz must really, really, love making movies about people sitting in parked cars discussing topics that have absolutely nothing to do with the storyline, because he seems to have gone far out of his way to fill up this film with it.

I have a long list in my head of things I could have done rather than see Cold Weather, running the gamut from “read a really interesting book,” to “write an angry and confused letter to Aaron Katz asking why he thinks we are so interested in watching people sit in parked cars.” In the meantime, I will be hanging on to my receipt for the movie, because I expect that when I die I will be able to get the time I spent watching the film subtracted from my sentence in Purgatory. I will be sure to let you know if Purgatory or Cold Weather is more interesting.

P.S. Readers! Did you see this movie and agree that I am a complete and utter moron? Please tell me why, because I am mystified. Sincerely, Tucker.