Review of tEEth: Make/Believe at On the Boards by Sandrine G. 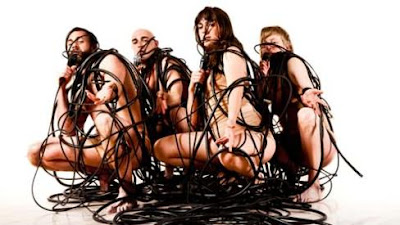 Make/Believe, performed by the appropriately-named, Portland-based performing arts troupe tEEth, has an oral fixation. Performer Shannon Stewart describes the mouth, stating, “On the inside it feels like a relatively small detail in the overall unfolding of the world,” but Make/Believe airs multiple examples of the contrary, riffing on perfunctory responses, sexual innuendo, and absurdly humorous chatter.

Like children discovering lies, the members of tEEth exist in a distorted soundscape where words bend under the weight of meticulously choreographed action. Not only to amplify confused speech, omnipresent microphone wires trace tides of misunderstanding on the boards as the performers drag them around the stage, using them as props and costumes and vestigial, symbolic prosthetics that stay visible even as the dancers mute themselves against each others’ bodies. Emerging from a sliver of astral horizon, the lighting shifts about the artists as their words swim in waves to the audience, at one time transforming Stewart’s head into a torment-gilded supernova. 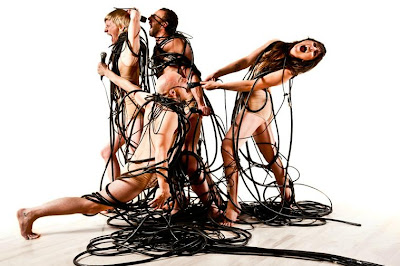 Sometimes slow and demented like a 3-D episode of Salad Fingers, it is just as absurd and as open to interpretation as the title “make believe” would suggest: perhaps it is an anti-bullying manifesto, perhaps a feminist critique of contemporary power dynamics, perhaps a self-reflexive meditation on the impracticability of human empathy. The displaced communication and cross-purpose actions in Make/Believe highlight that though there are infinite possibilities of oral manipulation, there is also inherent impossibility in perfect understanding. But it is beautiful to try.

Make/Believe is closed. Learn more about tEEth at teethperformance.com
Next up at On the Boards: Phone Homer
a smart and funny take on The Iliad by dancer/videographer Michelle Ellsworth
March 15 - 18
More info at ontheboards.org