An audience member asks, “Does it end when they all die?” The Sky Turns features the 14 remaining elderly inhabitants of an ancient Spanish village. The film moves as they move: slowly but deliberately, satisfying essential requirements while taking time to contemplate the Big Questions. It takes a subject, like the one posed by the inquisitive viewer, and twists it into metaphor. 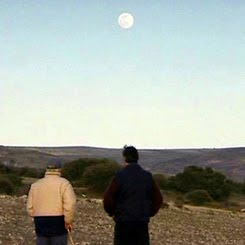 It is not a beautiful movie, but the overcast memoryscapes of the windswept Iberian countryside perfectly complement the wistful narration by graying villagers. They talk over each other like extended family at the dinner table as they discuss the desiccated old elm tree. Pictures of it in its prime dance across the screen, revealing that more people once gathered around it during a single party than the entire current population of the town. But it became diseased as time marched on and families departed the old-fashioned agrarian community. The disease and yellow lichen worked away at its bark, and its knots and cavities are easily imagined into grotesque faces by minds searching for human familiarities. Its branches cut off, it stands in solemn isolation in the courtyard of a mysterious palace.

Some of the morbid secrets of the land are exposed meticulously by the archeologists who excavate the stony remains of a pre-Roman township whose history ended in mass suicide. But sometimes stones are unearthed by the inheritors of the land themselves as they till the soil and tend flocks in their ancient manner. Director Mercedes Álvarez, the last child to be born in the village before her family moved away, uses this information to fuel reflection. Death and history are thematic, every gray frame hinting at the transience of life, but the slow, thoughtful rambling of the villagers and the humorous bleating of their exotic Arab sheep are entertaining in a fitting way. They belong to a certain place and to an instant when the villagers were still young and the scars of the Spanish Civil war had not yet been romanticized by the passage of time. That moment has already begun to depart, but it will never end as long as there are movies like this and people to watch and question.