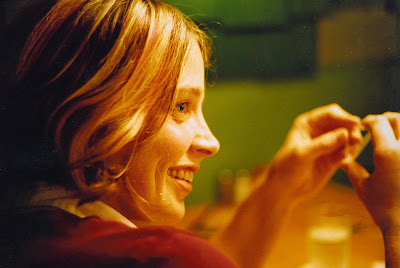 What is mumblecore? According to Filmmaker Magazine, these films are "severely naturalistic portraits of the life and loves of artistic twentysomethings" characterized by "improvised dialogue and naturalistic performances, often by non-actors. The films employ handheld, vérité-style digital camerawork and long takes. Budgets are tiny. The plots hinge on everyday events. The stories are often obvious reflections of the filmmakers’ lives...A lot of tension ensues over the answering or non-answering of cell-phone calls. Characters frequently attend and perform in sparsely populated weeknight music shows. There is an abundance of road trips."
Director Joe Swanburg (Hannah Takes the Stairs) says it's much simpler than that: "The only rule is 'No jerks allowed.'"

Either way, it's what's happening in indie cinema right now, and this weekend Northwest Film Forum is giving you the perfect opportunity to decide for yourself whether it's sheer genius or pretentious crap.

Beeswax is the story of a couple of vintage clothing-store owners, a couple of sisters, a couple of boys, and a lot of ways you can complicate your life in your twenties. That's you pretty soon guys. Better study up.

V.A. Musetto from The New York Post calls it "wise and wondrous." Scott Tobias from A.V Club says it's "funny and acutely observed." J. Hoberman from The Village Voice deems it "fascinating."