Review of Or, at Seattle Repertory Theatre by Chelsea D. 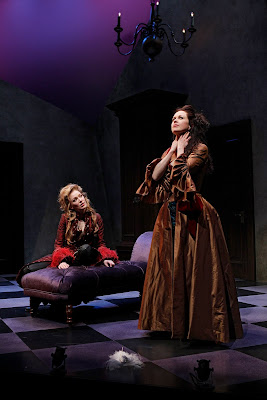 
It takes guts, determination, and unabashed candidness to be England’s first female professional playwright, and an ex-spy. Luckily, Aphra Behn has all three of these qualities in spades.

Or, is about as far from the traditional period-piece as one can imagine. Set in Restoration-era England, Or, is a three-actor play following Aphra Behn, a quick-witted and sharp-tongued woman trying to make a career as a playwright while being pursued not only by Nell Gwynne, a famous actress of the time, but by none other than King Charles II.

Kirsten Potter steps into Aphra’s turquoise tights, piled hair, and medieval-looking dress almost too naturally. She portrays Aphra as loud, brash, and unashamedly sexual — a characterization which both suits her acting style, and links brilliantly to her two costars, Basil Harris (who plays no less than three roles, one of them in drag reciting a deliciously humorous two page monologue) and Montana von Fliss (preforming as Nell Gwynne, the sassy actress raised in a brothel). Potter’s movements are vital and often purposefully overdramatic as she uses every aspect of Matthew Smucker's set to her advantage, from the fierce lighting (by L.B. Morse), to her writers desk. 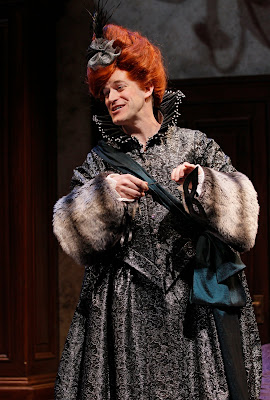 Basil Harris stars in the Or, at Seattle Repertory Theatre. Photo by Chris Bennion.


Another distinctive element of Or, is the presence of music, set changes, and hard lighting. Though set during the mid-1600s, several concepts (most strikingly the themes of open sexual preference and music) give it a subtle yet strangely well integrated Glam rock element. In several scenes, 1970s glitter rock music becomes almost a character of its own — playing while Aphra writes, or while Nell Gwynne preforms, giving each scene a whole new edge. This feeling is also translated through the many mentions of open sexual preference, interwoven into the story’s characters (nearly all of whom mention having had sexual partners of both genders) and casual dialogue. These ideas are far from the strict religious rule of the 1600s, and give Or, a strangely modern touch.

However, though the actors, mixed timelines, and plot shine admirably, the play is taken from a light, humorous play to an incredibly humbling piece of drama through the superb writing. Or, may be a play, but it is first and foremost a work of literature written by Liz Duffy Adams. Adams flawlessly mingles themes of religious conflict and plague with a the idea that it is “all in good (albeit sexy) fun.” She switches from long meaningful monologues, to classic elements of comedic theatre such as multitudinous doors and hidden characters, to inspiring feminist ideals all within the space of a single scene.

All of these elements compiled (and many more untranslatable into text) are what create Or,. Built upon a quirky yet historically accurate plot based on actual people, the subtle intermingling of centuries, and fantastic acting, Or, is not a play to be missed.