Review of Break a Heart at On the Boards by Leah S.

On the Boards, a hip venue for contemporary performance art, features a full stage on which the cast of Break a Heart can flip, strip, swing and sing. A backdrop of iridescent white balloons reminiscent of a high school Valentine’s Day dance and an otherwise sparse set allows for easy transitions within and between dance numbers. Despite the energetic buzz radiating throughout the theatre, the quality of performance ranges from inspiring to boring to downright creepy. The opening act, Summer Loves Fall, features choreographer/performer Stephen Hando reclining in a beach chair, with long-limbed, short-skirted dancers parading around him in a “you can look but you can’t touch” routine of which Fergie would have been proud. Disappointingly, Hando’s stage presence fails to compensate for the utter lack of energy in the otherwise technically accurate performance of the three young female dancers and the lagging wall of sound that is the Violent Femmes. Hando demonstrates singing chops as he musically begs the girls “please, please, please do not go,” but detracts from his own performance with poor mike technique. 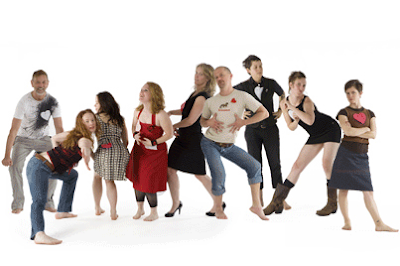 The next piece, Heavy Heart, suffers the same syndrome as its predecessor. Sara Jinks’ evocative choreography fell somewhat flat in the hands of talented but unfocused dancers Kate Kerschbaum and Sandra Fann. The absence of motivation, emotion and drive pulls heavily at the dance, the evolution of a relationship in twelve square feet that progressively took over the entire stage.

Break a Heart is not saved by Wade Madsen’s self-directed Enchanted Prince. A campy, maudlin clown lip-syncs and pantomimes humorously to jazz standard “A Time for Love.” Madsen then transitions to a skilled movement piece, which quickly degrades to grotesque “Bad Romance” – inspired fingers and unnecessary nudity.

Kristina Dillard’s Heavy on the Nymphs showcases four young and delightful contorting ballerinas in white blouses and nude-colored spandex shorts, prancing to skilled piano man Dayton Allemann’s representation of classic Vivaldi. Broadway performer and Cornish alum Stacee Raber Nault plays a somber bride, finishing the performance with an a cappella rendition of Hayman and Youngs’ “When I Fall in Love.” Though aesthetically pleasing, Heavy fails to evoke the classic Greek myth of Persephone, on which the piece is based.

After intermission, Break a Heart begins to pick up speed. Random but hilarious give it I got it breaks the awkward monotony of the amateurish first act, substantiated by charismatic and lovable performers MouseBones (ilvs strauss and Jody Keuhner), Tiffany Lin, and Alianna Jaqua. A controlled careen of precise spasticity boasts mad dancing skills. It is Diana Cardiff’s Don’t Hit Me No More that finally produces the needed combination of high-level concept, choreography, performance, energy and polish. Heather Coyle and Michele Miller rock Cardiff’s lyrical martial art choreography in both technique and spark.

The true highlight of the show is Crispin Spaeth’s for. Six dancers shine in this highly complicated piece of passion and sex set to Dale Sather's eerie sci-fi sound effects. Varied elements of puppeteer versus marionette, the trade, theft, seduction and betrayal of partners, impressive lifts, stark emotion, waltz, tango and salsa make for a layered performance piece. The previously raucous and excited audience is hushed, unspoken wows reverberating throughout the theatre.

Unfortunately, Break a Heart chooses to eschew the beloved tradition of ending on a strong note and culminates in a blackly comical interpretation of Love Hurts. Viewer discretion advised for sensitive vegetarians.

Break a Heart runs through Sunday, February 14th at On the Boards. On the Boards' programming is best suited to mature audiences ages 16 and up. Read audience reactions to the show on OtB's blog