Review of Stefan Jackiw Plays Barber at Seattle Symphony by Anna B.

If you’ve never been to a classical music concert, your first time can be a little terrifying. You might think to yourself, what if I don’t like classical music? What if I’m terribly bored and prove to be a barbarian who can only understand the Jonas brothers?

Don’t worry. The first half of this concert will leave you breathless. You’ll be passionate about classical music for the first time. I can guarantee you won’t be bored. 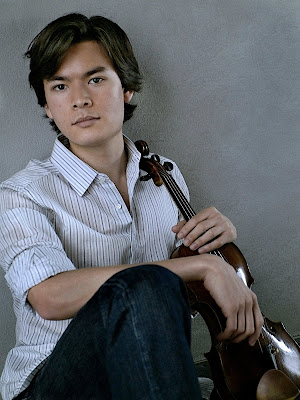 Then, once you’ve discovered all this, I would advise going to that delicious gelato shop on the corner. And then going home.

It’s unfortunate, but the last half of the concert completely didn’t live up to the first half. Brahms is nice, and Schonberg’s interpretation of Brahms’ piano quintet as a symphony is—simply nice, not thrilling. The work has interesting connotations for music-minded individuals and probably, for any other second half, would have been good.

The first half is really the problem—it’s so amazing, the second half just can’t compete. The Seattle Symphony plays two of Samuel Barber’s pieces—the first, a piece based on Medea from Greek mythology, and the second, Barber’s famous violin concerto. Medea’s Meditation and Dance of Vengeance is fantastic; it’s a wonderful introduction to Samuel Barber’s sound and style of composition, and the themes carry powerful images of jealousy, vengeance, and love turned to hate.

Now comes the moment of truth: Samuel Barber’s violin concerto. Stefan Jackiw, an well-established young violinist, playing one of the more famous and difficult violin concertos with an orchestra decades older and wiser than him.

I have a confession to make; Stefan Jackiw is totally and completely crushworthy. As an aspiring violinist, I can only gape at his perfect intonation, flawless shifting, precise fingering, effortless bowing. Indeed, his performance as a whole was completely and totally effortless—never once did he leave the audience in suspense; will he miss a note? But despite his natural ease with the concerto, he played with such dramaticism that the audience—and I—were drawn right in from the very beginning. I held my breath between movements and glared at anyone who dared cough. First and second movements went by in a rush of fingers and hushed pauses.

The third movement is only about four minutes long, and there’s a legend associated with it. Samuel Barber wrote this for a specific violinist, and gave this violinist the first two movements of the piece. This violinist merely sniffed; it was too easy. Barber, in a huff, then wrote the third movement. For about the first page and half, it’s impossible to tell whether the solo violinist and the orchestra are actually playing together or not. Many a lesser violinist has fallen beneath the violent attack of triplets.