Review of Company at Seattle Musical Theatre by Emma M.

In 1970 Stephen Sondheim and George Furth wrote a musical that changed the way we think of musical theatre. That play was called Company, and it was the first nonlinear “concept” musical. It is made of little scenes that weave together to tell the story of Robert, a single thirty-five year-old in the heart of New York City. Throughout the play he watches his friends work out their relationships and struggles with his own desire to be married, and his fear of being alone. Now Seattle Musical Theatre brings back this fun play from Broadway’s archives. 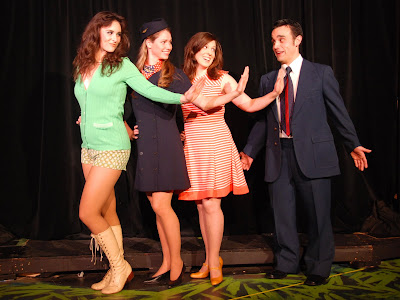 On the whole, the cast is good but there are some standout performances. Julie Drummond as Jenny is very funny and has a lovely voice. Kat Schroeder as Amy performs her song “Getting Married Today” superbly.

The good writing, songs, and performances could be better supported by a simpler set. The many stairs that actors are constantly ascending and descending distract the audience from the story and slow the pace. The play’s unusual style calls for a very quick pace both in scenes and in scene transitions. Also faster pace would allow the audience better to follow the story and retain interest in the challenges Robert and his friends were facing. A more consistent sound quality would make the challenging songs lyrics easier to hear and understand.

Company is humorous and touching. Although this production has inconsistent aspects, there are some lovely songs and performances that make it enjoyable.