Showcasing the local music scene of the future, maybe even the present, Sound Off! began back in 2002 at the Experience Music Project in Seattle, designed for age 21 and under artists to have a place to get their name out. Many artists such as 2003 runner ups the Schoolyard Heroes and 2007's 2nd place winner, Natalie Portman's Shaved Head, have enjoyed some success from the competition's raising awareness of the bands. Tonight's winner, Candysound, received a spot in the upcoming finals on March 6th. 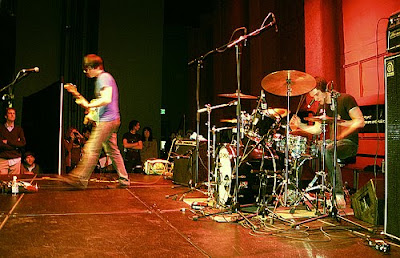 The night began with primarily acoustic five-man band, Seattle-based Sea Fever. Charistmatic frontman Andy Zook deftly wove soft tones with mindful lyrics. There were some weak spots in the harmonies but the vocals overall were masterful, at least on Zook's part. One song featured a dreamy xylophone line and guitarist John Keane absolutely murdered a solo with a violin bow. Each song was progressive in itself, building up and breaking down with the obvious mastery of each member's instrument. Early contenders for the victory of the night, Sea Fever received the most applause at the end of the evening, winning a synthesizer. 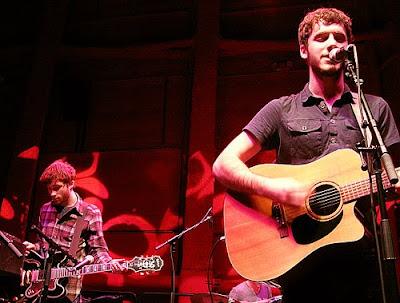 Second up was Apache Chief, a three piece group from Tacoma taking influence from garage, noise, sounds ripped right of 1980s hardcore. While their speed and sheer intensity definitely rocked the room, Apache Chief had many repetitive riffs with little diversity on their guitarist's fret board except during wild solos, and the bass lines failed to drive the songs. An instrumental late in the set was probably the best of their set, displaying some math rock influences.
Perhaps the problem was a lack of originality or bringing of anything new-sounding to the stage.

(Sui Generis), a quartet originally from Kennewick, followed Apache Chief, and their set was vastly eclectic. To place a name for their style would be difficult by conventional genres but they have described themselves as "circus metal," and this label shined through the dark and sometimes ghostly sounds of (Sui Generis). From the start their impressive use of Middle Eastern-influenced guitar harmonies and technical bass lines spinned strange tales of characters whose many voices were channeled through vocalist James Garner. Prominent tempo and time signature changes and influences from reggae to metal and use of enigmatic and liquid sounding pedals could be heard in their high concept songs. Though the music was quite varied and never was uninteresting, the vocals were at times flat but expansive and climbing.

Bringing the eve to a close, the duo from Bellingham called Candysound took stage. Catchy from the start, both drummer Tom Fitzgibbon and vocalist/guitarist Teo Crider proved to be independantly skilled but their chemistry was obviously great and they complemented each other over and over again throughout their set. Their lyrics were insightful and emotional, and blurred the lines of pop and rock. Some songs came off as overly anthemic, and one song featured so much guitar pedal changing it was dizzying, but they were well balanced by ethereal build-ups and evoking solos.

At the end of the last set and a short deliberation period, Candysound was announced as the winner and Sea Fever as the runner up. Candysound's cute and strong but not overbearing presence gave them the win.