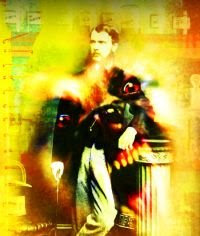 Dr. Jeckyll and Mr. Hyde
Come celebrate the first show of ACT's 2009 season with a special backstage tour, a conversation with Artistic Director Kurt Beatie, and gourmet popcorn to boot!
Your Teen Tix pass gets you $5 admission to all of the above.

ACT is an amazing space. . .you don't want to miss out on the tour.

About the Show:
Jeffrey Hatcher has seen the Victorians, and they are us. In his inventive retelling of the classic thriller, four different actors play Henry Jekyll's depraved alter ego. With its observations on the blurry line between good and evil, audiences will savor this show's psychological musings as much as its classic melodrama. And if you think this timeless story just might say something about how we live today, well...the doctor is in.

"Hatcher has written a play that honors the original, but gives a more complex interpretation of the dual nature of man . . . It's a dark and disturbing story liberally peppered with humor."
Arizona Daily Star

You must RSVP to attend. Email teentix@seattle.gov with the name and number of people attending by Monday April 20th.