Review of Julie Andrée T. | Rouge at On the Boards by Sam H-A. 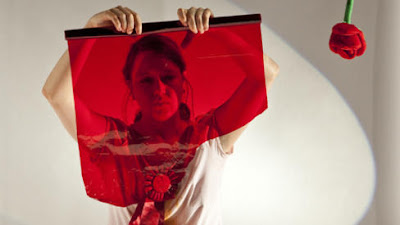 These are the only words you hear for 70 minutes straight. In the contemporary performance Rouge, Julie Andrée T. tells no story, and sends no message. She uses miscellaneous every day objects in an attempt to do something that the audience simply can not figure out, and offends a great portion of the audience in the first few minutes, simply by eating an entire red bell pepper onstage. By the end of the performance, the stage looks like a two-year-old's room after a temper tantrum. Tissue paper, spray paint, colored water, paint, glitter, buckets, and even a hot water bottle are scattered about on a white paper canvas, covered in glitter, spray paint, and paint. While eating various foods, spitting everywhere, sticking pipes and feathers in her hair, and even UTILIZING a sex toy onstage Andrée T. never sends a message on what she's trying to convey. I will never forget the words that my best friend spoke to my mom after seeing the show; "I'm an atheist, I don't go to church, but the theatre is the closest thing I have to a holy space. To see it being so disrespected and so defiled in a matter of minutes, is truly upsetting."

Rouge not only displays a lack of talent, but also is disrespectful, upsetting, and much too sexual to be considered "16 and up".

Rouge is closed
Next up at On the Boards: Trimpin | The Gurs Zyklus
May 17 - 20
More info at ontheboards.org