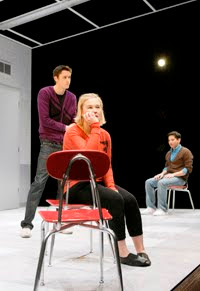 Hey lovebirds! Wondering what to do on Valentine's Day? Want to do something special, unexpected, perhaps...arty? See Speech & Debate at Seattle Rep! Check out this great offer from the Rep:

"It bares the basic nature of high school life, which appears to be frantically fluctuating emotions mixed with the basic part of human nature that longs to fit in and be accepted. It’s entertaining and generally tragically true, striking a little too close to home to be forgotten in a hurry." - Charlotte L.

"Complete with pop culture references, podcasts, American Apparel merchandise, and dark humor, Speech & Debate shows you that with friendship and going against the norm, the truth can be exposed." - Laura V.

"As a piece of theatre Speech & Debate thrives" - Emma K.

Speech & Debate runs Wednesdays - Sundays through February 21st at Seattle Rep. To purchase your advance tickets to either performance on February 14th, call the box office at 206-443-2222 and mention the code word CUPID. For more information about the show, visit seattlerep.org.