Review of The Beast @ Spectrum Dance Theatre by Olivia M.

Looking through the multitude of notes I took at this performance, one stuck out as a summary for the whole experience: “Short, and anything but sweet.” This piece, only 55 minutes long, is a blunt, dramatic look at domestic violence and it is one of the few times I left an artistic performance feeling as if I had undergone an emotional trial, but in a good way! I would 100% recommend this to everyone.

This piece was first commissioned in 1996 by the UW’s World Series and Dance Umbrella in Austin, choreographed by Donald Byrd, and was used to promote domestic violence awareness (which it still does, with domestic violence awareness and resource pamphlets arranged in the front entrance of SDT.) This is a mixture of: what, due to my dancing ignorance, I would call contemporary dance; live music by a pianist, accordion and percussionist, violinist and woodwind player and acting done mostly by the main actors in both facial expressions and body movements. 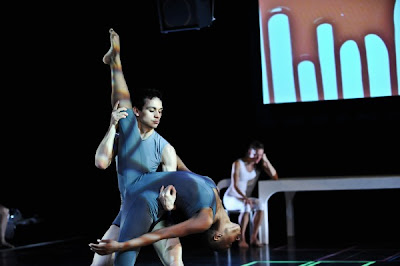 Byrd re-imagined his original piece for its second debut here at SDT, keeping the same steps but this time making it much more “theatrically interesting”, and making use of the characteristics of a theatre style called epic theatre. This included adding literal announcements by a dancer with a megaphone, adding a talking disembodied head which screams at the abusive groom, representing his inner urges, and having a bare stage save for a few chairs and a table used in different scenes. This combining of dance and theatre brings out the best of both mediums with blatant yet subtle presentation of the troubling subject matter. This is evident in scenes such as “The dance about the joke of the perfect wife” where the leads have the most individual version of the misogyny themed choreography, where Monthy crawls like a dog with Jones’ beer can balanced on her head, which is a very clear, narrative ridden chain of events, but with three other pairs of dancers doing similar choreography, but with less individually bold movements, like back-up dancers for a play. 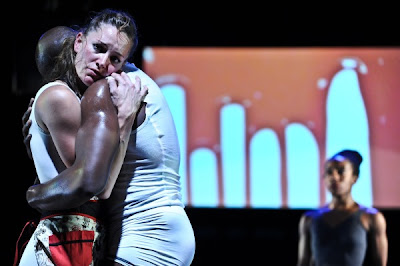 Due to how much I liked most parts of this performance, I find it hard to narrow it down for this review, but here are three main points:

1) Leading dance artists (that’s really the only way to describe them properly) Donald Jones Jr. and Kate Monthy do an amazing job in their roles of abusive groom and abused bride, and I can see in the future attending shows just to see either of them. Jones’ best scene was announced as “The Beast Breeds”, wherein a powerful solo dance honestly gave me shivers, outshining his bride as she gives birth while screaming with almost comical loudness. Noteworthy scenes of Monthy’s include her in “She Has A Fantasy” where she mutilates various pieces of fruit that correspond to Jones’ body (yes, she does chop a banana with the most crazed look on her face, and yes, that banana does correspond to his penis,) as well as a very sad scene where she watches other pairs of dancers act out violent scenes, which seemed to be to be representative of her past experiences in her own relationship in the piece.

2) I can pretty much guarantee you will enjoy this performance, and be genuinely glad you made the trek down to Madison Park. The entire cast is emotionally invested in the piece, making their performance all the more intense. Monthy admitted to having cried on the way home from rehearsals on occasion due to the emotional stress of the subject. Where was I able to hear this sensitive information? Well, during the time available after each show to ask questions of Byrd, Monthy, Jones, and a third dancer, Ty Alexander Cheng, of course! I felt so lucky to take advantage of that time to pick the brains of the people who masterminded and performed what I had seen only minutes prior.

3) Last, but certainly not least, it’s Domestic Violence Awareness Month. This is probably the best way to acknowledge and learn about a common occurrence in our society that I would guess a significant portion of us rarely think about.

NOTE: The Beast contains mature subject matter and is recommended for ages 16+.