Remember in the last episode of Glee, when Rachel Barry claimed that “you either want to go first or last?” To go first means that everyone gets compared to you or it is great to go last because you’re fresh in the judges’ minds. I was a firm believer in that statement, until I attended the second round of the semifinals of the Sound Off! competition put forth by the Experience Music Project. The superstars of the night would be three great bands: A Cozy Kitchen, The Cat From Hue and Pan Pan alongside a solo superstar, Hooves and Beak. Clearly the order the artists went in did not matter much here. If anything, the better acts played 2nd and 3rd, not first or last. 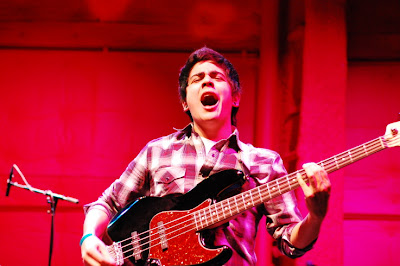 The Cat From Hue. Photo by Brady Harvey.

The night started with A Cozy Kitchen, a three person band from Bellingham. This trio gladly reminded me of Modest Mouse. The lead guitarist’s vocals surprised me, in a good way. Their music wasn’t particularly a favorite of mine, naturally not being a fan of folk music, but they simply weren’t bad. As they kept playing their set, they performed better with time. Not bad for a first act.

Next up was Camano Island’s The Cat From Hue. It was clear that the audience was mostly made up of their fans—the audience response was great. They clearly brought the whole island with them and packed the EMP. This band was a personal favorite of mine and as I sat in the back listening intently to their lyrics and swaying to their music, I imagined doing the same exact thing at Bumbershoot, just a couple of months from now. Their music helps me to appreciate folk music much more and they had a much stronger stage presence as they were performing. Their lyrics related more to the simple things in life and to something that matters a lot to us Washingtonians: the Pacific Northwest. 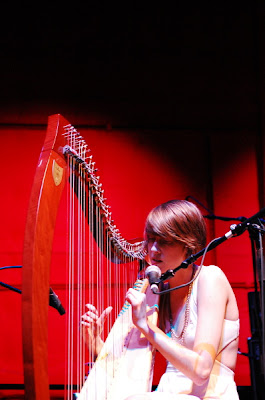 Following The Cat from Hue, was a surprising number from a solo harpist by the name of Hooves and Beak. Her music delighted me and surprised me, in also a good way. It is amazing what one instrument can bring to a whole song. It was refreshing to contrast the sounds of guitars and drums to one of the harp. Her lyrics were deep and meaningful and the harpist herself reminded me of Dido. She connected well with the audience as she felt more comfortable making jokes as her set continued on. It was obvious that she was well liked. The pressure of performing by herself seemed like nothing to her, especially since she was performing against three other bands. 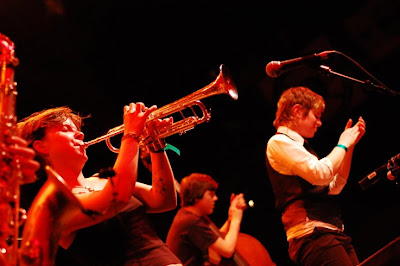 Hooves and Beak was followed by an instrumental band called Pan Pan, who were just as awesome as they sound, just by the name itself. Pan Pan, in addition to the traditional drums and guitars, has a saxophone and a cello. They also have a noticeably large fan base, both present at the EMP and on facebook.

Hands down my favorites of the night were Hooves and Beak and The Cat from Hue. I think that each band played their little hearts out as best as they could, but the judges definitely chose the right artists to move on in the competition. We are watching the future of music emerge onto the scene right before our very eyes. Don’t you want to see for yourself what the hype is all about? I’ll be rooting for Hooves and Beak throughout the competition and I hope to see her perform at Bumbershoot this summer. Do not miss a chance to see her perform in the finals. The harpist herself is enough reason to use up all of your pocket change to purchase a ticket and to go see live.