Review of Something's Afoot at Taproot Theatre by Katie M.

Taproot Theatre is continuing their 35th anniversary season with a fantastic production. Something’s Afoot can best be described as a murder mystery musical filled with quirky characters and lively songs. The play is set in the 1930s, and the sets and costumes reflect that time period. Lord Rancour’s lakeside estate is well furnished by scenic designer Mark Lund, providing a great backdrop for the story. 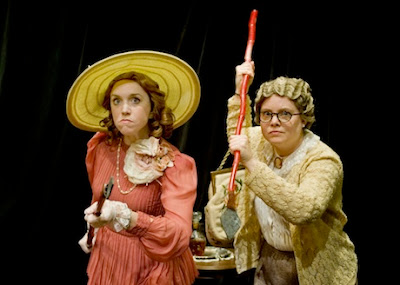 
This play is a spoof on Agatha Christie’s famous novel And Then There Were None (otherwise known as Ten Little Indians). The storyline follows a group of visitors spending a weekend at Lord Dudley Rancour’s home. When the master suddenly dies, followed by his butler, the race is on to find the murderer. In the first song, “Something’s Afoot,” Miss Tweed clearly states: “The butler didn’t do it!”

One enjoyable aspect of the play is how dynamic the characters are. As the production progresses, they grow and change. Lady Grace Manley-Prowe and Colonel Gillweather discover that they were in love once and had a child. Hope Langdon and Geoffrey fall easily into friendship upon meeting. Every character is entertaining in their own way, however, my favorite character is Miss Tweed. Her unique mannerisms and take-charge attitude make her character very unique. Jenny Cross, the actress who plays Miss Tweed, does an exemplary job and maintains her part quite well.

Another feature of this play I noticed was the creative use of comedy. I wasn’t expecting it to be as funny as it was. Light-hearted comments punctuate more serious situations that arise throughout the story, such as the death of a character. Every character has a few upbeat lines that keep you entertained. When Lord Rancour’s nephew, Nigel Rancour, began a spastic search for his wealthy uncle’s will, I laughed out loud. When he clicks his heels and cartwheels over the furniture, it is hilarious. As it turns out, Ryan Childers, who plays Nigel, has a day job teaching preschool.

In addition, the musical numbers in this production add to the overall ambiance of the show. A humorous number titled “Carry On” involves the four female characters and a patterned dance with spears. “I Owe It All,” one of the last songs, ties everything together in a comical way. The emcee told us there was a live band underneath the stage, but I still don’t know if he was serious! You’ll have to come see Something’s Afoot and find out for yourself.