Review of Passione: A Musical Adventure at NW Film Forum by Sandrine G. 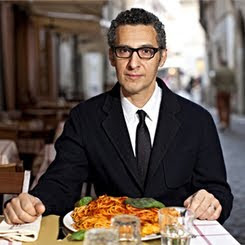 A parade of dangerous-looking, sun-baked women strut and sing their way through the musical pieces like the subjects of a string of internet videos whose links are clicked more through compulsion than desire. Accompanied by their impetuous lovers and neighbors, their dramatic flare demands all the attention of a peoples’ opera. Eminently entertaining, Passione nevertheless belongs less to film than to the music which it claims to illuminate.

Although the movie is beautifully shot, its director John Turturro is often self-indulgent. He inserts himself into several dance numbers. He also appears throughout the film as a narrator and pretends to offer a profound analysis of Neapolitan culture that goes deeper than sentimental nostalgia while spewing clichéd nothings like some places you can go to only once; then there’s Napoli. 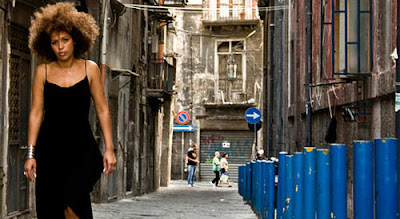 That being said, Passione is cultural pornography in the best sense of the phrase. The sea and the sky are a gorgeous Mediterranean blue, each scrap of colorful graffiti becomes brilliant folk art under the gaze of the camera, and the array of cultural components to the rhythm of Neapolitan life is as splendid as the natural beauty of the sun-drenched Italian city.

The fusion of cultures is astounding, from flamenco-like dancing originating on the Iberian Peninsula to the wailing, chanting North African and Middle Eastern musical elements to the hints of American pop culture that were all brought to Napoli’s shores along with the anguish of occupation. The tragedy of poverty and the risks of making homes under the shadow of volcanic Mount Vesuvius are both material for the powerful song and spontaneous lifestyle of Neapolitans. The only problem is that all this is already apparent in the trailer and becomes fully actualized in the music. Though beautiful, the film itself offers little context and less explanation. 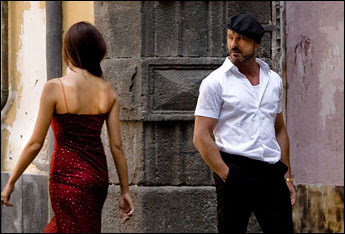 The soundtrack of Passione can be found on the internet and is selling at the North West Film Forum, the same place the movie is showing, and costs $20. This is slightly more than the cost of two general admission tickets but, unlike watching the movie at the theater, the CD can be enjoyed over and over again.