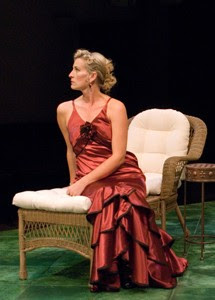 Taproot Theatre closes their 2008 season with “Susan and God”, a light comedy from playwright Rachel Crothers. It may not be very well known, but it was a huge off-Broadway success in 2006, with the New York times calling it “a rare gem”. Now, the questions is, does it work magic on the Taproot stage? Indeed, it does. It may not be the funniest thing to grace the stage, but it is fun just to watch, despite that one maybe not aching from laughter.

Susan is an eccentric woman who returns from a visit to Europe. She comes back to her friends after being full reintroduced to God. Imagining herself as a godly person, she uses her new philosophy to influence and correct the errors of her friends, completely without seeing the flaws of her own. She has become totally self-centered, which has left her husband to drinking and her daughter to solitude, longing for attention from her mother. She eventually makes a deal with her husband to become a family once again, and eventually finds the errors of her ways.

The cast, as with that of most shows found at the Taproot, is fantastic. Everyone slips into their roles and not only acts as their character, but actually are their character. Such is the case with Lisa Peretti, who plays Susan Trexel. She pulls you in with such conviction in her performance, and from the very beginning grabs your attention and puts a smile on your face. I especially loved how eccentric and joyous she was in the beginning, where she prances on stage, greeting everyone with a squeal and a big kiss. The final scene with her and her husband Barrie (played by Don Brady) is both captivating and touching.

As for the rest of the splendid cast, some other notable performances are Austen Case (Blossom Trexel, Susan’s “ugly duckling” daughter, who we get to see transform throughout the show), Heather Hawkins (Irene Burrows, Susan’s elegant friend) and, as previously noted, Don Brady. All of these actors are fully believable and pull you into their story. I found it funny though how in the first act, Brady seemed to be walking awkwardly and acting strange, which made me begin to doubt his acting ability. After a moment, I fully realized they were mannerisms of a drunk, for which he was a believable one at that. Props to him for grabbing my attention in that way. As for the rest of the actors, they all play their characters to perfection. The only reason I don’t note them specifically is because there isn’t much depth to their characters, and the script doesn’t allow them to do much except be there to fill the stage, make jokes and start conversation. This perhaps, would be the only flaw I found in the play.

The set is very elaborate, as it resembles an outdoor patio complete with wicker chairs, foliage, fancy french doors and drink bar in Act I. It then changes into an exquisite mansion for Act II, with a fancy couch (the one used in Act I with different fabric), desk, and drapes to cover the walls. Big props go to the set designer, for such an amazing transition between sets. You forget they are, in fact, the same sets between acts. Big props also go to the costumer, for all of the extravagant dresses and suits worn by the wealthy characters of the show. Very good staging on the director’s part as well.

“Susan and God” is definitely not one to miss. Toss aside that you may not have heard of it, or that you think it may not appeal to you. It will. I recommend you check it out.