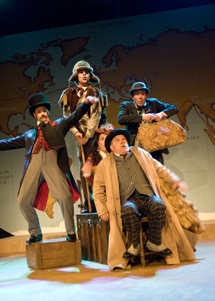 Around the World in 80 Days is the third production of Taproot Theatre’s 2009 season, and is sure to stand out as one of their best shows to date. Based on the 1873 novel by Jules Verne, it is a play adapted to the stage by Mark Brown mixing elements of action, romance and very silly slapstick comedy. It’s very similar to typical summer blockbusters: often silly and air headed, but a heck of a lot of fun. The script is extremely witty and the pacing is well fleshed out. Although the best parts in the play come from many of the funny lines delivered by the characters, some of the best parts involve the actors playing a variety of roles: specifically Andrew Litzkey, playing the Narrator as well as 17 other characters throughout the show. The script requires only five actors to play over 30 different parts, which all add to the fun.

The play completely follows the original plotline of the novel, unlike Disney’s 2004 box office bomb, with Jackie Chan. The story begins with Phileas Fogg (Ryan Childers), a rich and proper English gentlemen who is a member of the Reform Club, which is all that is known about him from the start as we are given no back story. He has just fired his former assistant for bringing him shaving water at the wrong temperature, when he meets a Frenchman by the name of Passepartout (Nolan Palmer), whom he then hires to fill the position. He makes a bet with the men in the Reform Club that he can travel around the world in 80 days, wagering 20,000 pounds if he can pull it off. He and Passepartout begin their voyage on a train to Suez, in which we find out that they are being followed by Detective Fix (Bill Johns). He is convinced that Mr. Fogg is the bank robber that he is trying to nab, because of Fogg’s wealth and the way that he escaped town right after the robbery. Fogg and Passepartout travel by train into India, where they help rescue a native girl Aouda (very well acted by Alyson Scadron Branner), who is about to be used for a sacrifice. She later decides to join them on their voyage, with Detective Fix following along in disguise. Their voyage continues to take them through Singapore, China, Japan, followed by traveling across the United States, eventually making it back to London. Along the way, they have to overcome typhoons, Native American ambushes, and various other zany situations.

As for the five main actors, Ryan Childers has the easiest job of only having to play Phileas Fogg the entire time. He plays it with heart, and he really becomes the character, especially in his movement which mirrors the sophisticated manner he follows at the beginning of the show. He also plays the straight man, not really aiming for a laugh, though his character does spout many a comedic line. Nolan Palmer does a fine job as Passepartout, making a really endearing character for the audience to get to know. Bill Johns is extremely funny as Fix, as he gets the great expressions and body language down with Fix and the other eight characters he inhabits. Of course, Andrew Litzky gets some of the biggest laughs in many of his 17 roles, particularly the grizzled sea captain and the American Yankee. He makes each role stand out above the other, though some of his roles require walking out on stage to say a line and leaving.

The set is part of the fun as well. Because the plot line consists of traveling to many different locations, most would expect big set pieces and crazy special effects. For set pieces, the stage consists of two boxes, two chairs, a crate and one stool. And yet, these pieces are used to represent a train, a court house, a boat, a pub, and even (creating a good deal of laughs) an elephant. It is brilliantly staged by director Scott Nolte, who is able to keep a steady pace and create laughs from things not even in the script. He also does a great job directing movement, especially in the typhoon scene or when the characters are sitting on a train or, per say, on an elephant. He deserved to be on the stage for the standing ovation the crowd gave at the performance Saturday night.

Some more special recognition goes to Mark Lund, for a beautiful, yet simplistic set. He also set up the exciting soundtrack, which really makes the play more exciting. Monty Taylor, who designed the lights, does some great work as well, especially with the lighting effects in the typhoon scene. Also, Nikki Visel, the dialect coach, for doing an excellent job with the actors with the many dialects used in this play.

Though Around the World in 80 Days was written nearly 140 years ago, it still finds its roots for the audience. It plays itself as a period piece, but also as a contemporary piece in its comedy. It’s a very silly show, without any underlying messages, and it doesn’t take itself too seriously, which is very good since it shouldn’t be taking itself seriously. A lot of the scenes play out like sketches from Saturday Night Live, with the people you recognize playing a random character in a different accent. If that kind of humor is to your suiting, this play is for you. If you’re interested in a little summer adventure, this may also be just the show for you. But most of all, if you’re interested in a great night of fun and laughter, I definitely recommend you check this out. I would bet 20,000 pounds you will not be disappointed.


You can see Around the World in 80 Days at Taproot Theatre, located in Greenwood
now through June 20, 2009
visit www.taproottheatre.org or call 206.781.9707 for tickets and more information.