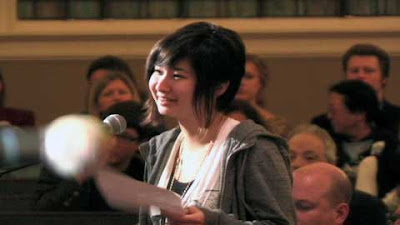 FutureWave Shorts 2009 is a collection of eleven short films. Overall, I found these films pretty disappointing, but there were two gems. “If You Want 2 Get Technical” is a sort of mini-documentary about an unusual African American family living in Brooklyn. The oldest sister, who is gay and in loving relationship, is raising her own child as well as her younger sisters. There’s a cheesy moment or two but mainly it is a really sincere piece (“She’s the man when I want her to take out the garbage”). The other one I really enjoyed was called “A Work of Fiction”. I won’t reveal too much about it because that would ruin the surprise, but the structure is fantastic and makes a relatively mundane plot clever.


“In the Loop” – May 21
After the US President and British Prime Minister decide to fight another war in the Middle East, US General Miller (James Gandolfini) and UK Secretary of State Foster (Tom Hollander) must work together to stop it. Their plans backfire, however, when Foster accidentally endorses the war in a television interview. “In the Loop” has been compared to “Doctor Strangelove” for its hilarious and biting criticism of war and politics.

“Passing Strange” – May 23
Each year, SIFF honors somebody in the film industry with a Golden Space Needle Award. Spike Lee will be receiving this year’s award at a special ceremony on May 23 at the Egyptian Theatre. As part of the tribute, Lee will do a full Q&A session with the audience and present his newest film, “Passing Strange,” an adaptation of the Broadway musical about a black artist who travels to Europe to discover himself.

“Dead Snow” – May 23 & 27
This relentlessly gory Nazi zombie movie from Norway looks horrifically entertaining. Eight Norwegian medical students on a ski trip are interrupted one night by a hiker who tells them about the Nazi occupation of the area during World War II. The Nazi soldiers supposedly froze to death, but as the vacationers soon learn, they weren’t quite dead yet.

“The Beast Stalker” – May 27 & 30
This thriller from Hong Kong centers around the kidnapping of a young girl by a one-eyed professional hitman. A police sergeant trying to redeem himself from a dark past takes on the case, and an elaborate cat-and-mouse game ensues. Sounds slightly corny, but should be an exciting action flick if nothing else.

“Tetro” – June 10
Francis Ford Coppola will be presenting a special screening of his latest film (and first original screenplay in over 30 years), “Tetro.” The film follows 17-year-old Bennie as he travels to Buenos Aires to track down his long-lost brother. Now going by Tetro, Bennie’s brother is wary of any connections to his former life, but once reunited, the brothers revisit their tumultuous childhood growing up with a self-absorbed musical genius for a father.

Visit www.siff.net/festival for more complete information on these films, as well as the rest of the 2009 line-up.