Confession: I have developed a tiny crush on a man more than twice my age. Scandalous, I know, but after seeing Michael Patten in Circle Mirror Transformation, I think it is perfectly understandable.

Set in a summer theater class, the junction of the lives of five very different people, we see characters develop beyond their superficial personalities, and remind us that everybody, from the most exuberant to the most awkward, has problems. Patten plays Schultz, an awkward, recently divorced man. He really shines in this part and I love his cadence of speech. The rhythm he talks with is so distinct, and so seamlessly pulled off that I can’t even imagine how he would talk in real life. His comedic timing is so great, and his presence kept me deeply amused throughout the entire play. 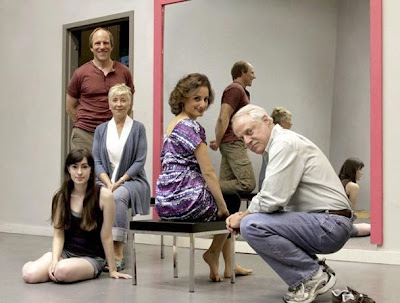 That being said, the play is a little slow; too slow for my tastes, and too long to go without an intermission. Maybe it is the “impatient teenager” part of me speaking, but the development of the characters dragged, and the long awkward pauses, where the characters just stared at each other, only added to this never-ending feeling. Playwright Annie Baker said that “when it feels like nothing is taboo anymore — we can have sex and violence on stage and no one blinks an eye — I think the one thing left that really makes people uncomfortable is empty space and quiet.” Well, she definitely succeeded in making me feel uncomfortable, but is that really a good thing? Does anybody go to the theatre to feel uncomfortable for 2 hours?

Also, there were times when the characters struck me as obnoxious. Only at times, and not enough to make me not like the play, but even though I know a story doesn’t need to have likeable characters in order to be a good story and that a character’s likeability is subjective, it was difficult for me to root for these characters when in reality, I didn’t want to befriend any of these people, not even Schultz, who has a special place in my heart. Because of this, I wasn’t completely with them when they overcame their challenges, and I found it difficult to really sympathize with them. Unfortunately this made the moments where the characters reveal their insecurities, when we are supposed to feel for them and connect with them, fall a little flat for me.

Regardless, I did like the play. As I said before, Michael Patten was very funny, and Elizabeth Raetz, playing the “hooping” Theresa, also had her moments of hilarity. All in all, it was an enjoyable experience.