Last week, after reading the summaries and reviews for Love Song, I was expecting your typical romantic comedy. I expected a storyline involving a man falling in love with someone else’s sister or best friend or him saving the future love-of-his-life in a freak accident. Well, what else are you supposed to expect when it says “romantic comedy” in the description? But Love Song follows a storyline that I was definitely not prepared for. Just so you’re not as confused as I was as the story unfolds, Love Song involves a hermit named Beane (played by Christopher Zinovitch), his sometimes overbearing sister, Joan (played by Heather Hawkins), her skeptical husband, Harry (played by Nick DeSantis) and a thief named Molly (played by Cindy Bradder). 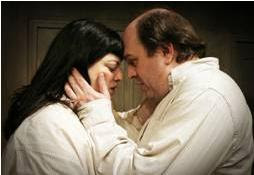 Beane does not like to deal with people or collect anything—the only decorations hanging on his walls are his keys and he owns less than 10 items. He is your typical hermit/weirdo. The only person he will really talk to is his older sister, who is greatly concerned with her brother’s self-seclusion from society. But one night, everything changes for Beane as he becomes accidentally acquainted with a woman named Molly, who is a thief. Beane ends up falling in love with her, and as problematic as it all sounds, his relationship with Molly doesn’t only change his outlook on life, but it also changes the relationship Beane’s sister, Joan, has with her husband in a surprisingly positive way.

The play carries well for only involving four actors. Bradder is a very forceful, aggressive, angry actress as she takes control of every scene she is in. Especially in her first encounter with Beane, Bradder plays a convincingly frustrated and confused thief. Zinovitch’s character is obviously the most entertaining as he plays a very spacey and “verbose” Beane. DeSantis and Hawkins (Joan and Harry) play your typical, humorous, argumentative couple. Each actor takes control of his or her character and brings out their characteristics in extreme ways. Love Song’s storyline is refreshingly different, raw and meaningful. It gives people the idea that change comes in the most unexpected places and to accept it regardless of the shape, form or package it comes in.