Review of The Great Divorce at Taproot Theatre by Jonathan H.

Truth be told, I wasn’t sure about how the new stage adaptation of C.S. Lewis’s “The Great Divorce” would play out. Having read the book in the past year, I was intrigued by the idea, but I never thought of the story making an interesting stage production, partially because it lacks a really thorough plotline. I expected a lot to be added to the script in order to appeal to a broader audience, but thankfully this never happened. This production is actually very close to the original novel, with words of dialogue and narration taken straight out of the book. And once again, Taproot Theatre brings out the best in everyone involved to give its audiences another quality production. 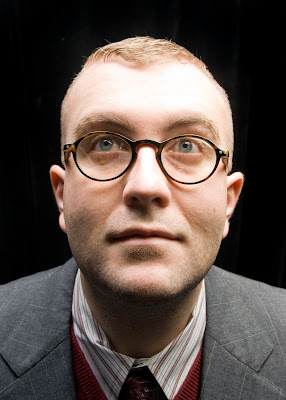 David Dorrian as C.S. Lewis. Photo by Erik Stuhaug.
The book, first published in 1946, challenged thousands who read it to take a look at religion and the afterlife in a different way. The title implies the divorce between Heaven and Hell and the beliefs held about the methods of reaching both. Lewis was a strong believer in the Christian faith, so his religious beliefs influence the narrative entirely. The play is also a theological view on Heaven and Hell, and poses the audiences with questions about life, death, religion, and God.

The play begins at a bus stop in a place only described as the Gray City (which sounds a lot like Seattle). A line is forming, and C. S. Lewis (David Dorrian) steps in to wait for this bus ride, unsure of its destination. He meets several characters on the bus, some impatient, tired, nervous, or anxious people, who share briefly with Lewis about their destination. Soon, the bus arrives and the passengers get off in what seems to be a Heavenly realm. Unfortunately, because these passengers are only visitors to this realm, the terrain is rough and dangerous; the grass can feel as hard as diamond to walk on, and a single raindrop could rip a hole right through you. Lewis begins to observe some of the passengers (referred to as “ghosts”) meet up with “spirits” who beg their attention to different details about their lives. Some of these spirits are siblings, begging the ghosts to come back to God. Other ghosts are visited by the spirits of their dead spouses, asking for forgiveness. Lewis eventually meets up with author George MacDonald (Nolan Palmer), who guides him through some of these various events. He eventually comes to see that the people on the bus are ignorant of their faith, and would much rather go back to the Gray City, which he later on finds out is actually Hell.

As previously mentioned, the story lacks a really thorough plotline. Not to say that the play lacks plot, it just doesn’t have a typical narrative like most other plays. Instead of a final climax to the show, or any sort of character arc for Lewis, we instead get various meet ups of ghosts and spirits, which doesn’t seem to build any tension or rising action for the story. This is however in the same style as the book, which doesn’t rely on action or comedy to appeal its readers. Because of this, the play can seem somewhat slow at times, particularly because some of the conversations between characters are a bit tedious or may seem somewhat insignificant. However, the actors do an admirable job bringing a lot of these scenes to life given that most of them are required to play multiple parts. Dorrian does an admirable job as Lewis, narrating and being our guide to the story. Palmer also is very good in his scenes with Dorrian in which he shares about the Heavenly realm and the people who are passing through. The rest of the cast does a wonderful job as well, each standing out in their scenes as either troubled ghosts, or helpful spirits. Special attention also should go to Scott Nolte for his masterful direction, Mark Lund for the intense and riveting “soundtrack”, and Sarah Burch Gordon for her inventive and colorful costuming.

Walking out of the show, I heard one woman jokingly ask her friend if she actually understood the show. I found that interesting to hear because C. S. Lewis’s ideas of this Heavenly realm and some of the scenes between ghosts and spirits do seem very obscure. However, I think all of that makes a interesting statement about humanity and religion that is beautifully presented through some of the metaphor used in the story. Taproot’s production is smart, inventive, and thought provoking, and while some of it might not all make sense upon first viewing, I definitely recommend it. It’s a show unlike one you’ve probably ever seen.